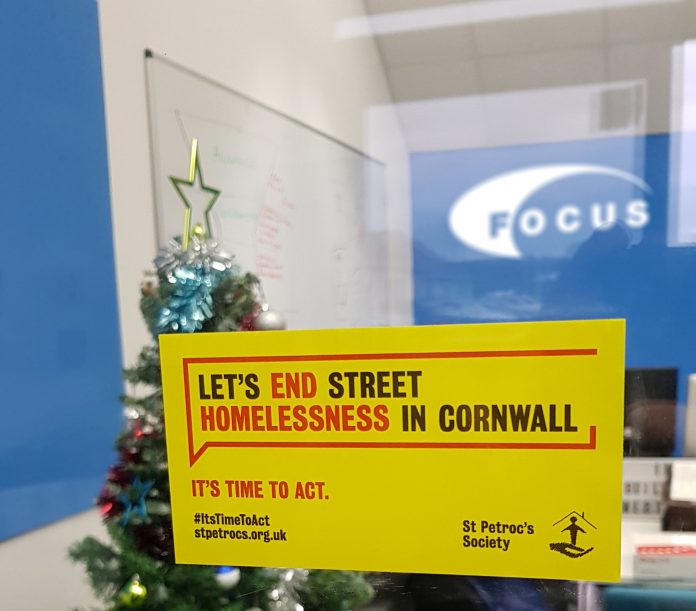 A campaign by a local charity raising awareness of the scale of homelessness in Cornwall has inspired Camborne-based IT specialist, Focus Technology, to take action.

St Petroc’s Society’s recent campaign to ‘End Street Homelessness in Cornwall’ has helped highlight the fact the Duchy has the third-highest instance of rough sleeping in the country with a 52% rise in people found sleeping rough in the past year.

The campaign uses the social media hashtag ‘It’s Time To Act’ and the team at Focus is answering the call by setting up a ‘Donation Station’ at its offices in Tolvaddon, near Camborne. Unwanted Christmas gifts taken to the office will be donated to help the homeless.

The move is one of many initiatives staff at the firm have put forward, having decided to adopt St Petroc’s Society as its charity of the year for 2018. Other ideas range from donating the proceeds from recycled IT hardware, to delivering basic computer skills workshops to help improve employment prospects.

MD, Andrew Davenport, said: “We have supported St Petroc’s annual ‘Sleep Out’ events at the Eden Project for the past three years and have gotten to know some of the staff and volunteers.

“Following November’s Sleep Out when a number of us had the opportunity to speak to one of St Petroc’s outreach workers, members of the team suggested we increase our commitment to St Petroc’s cause and came up with a number of ways in which we could do so.”

The Focus team are particularly interested in receiving donations of unwanted toiletries, underwear, bedding, shoes and clothes, or of tinned or dried foodstuffs and ask that bedding and items of clothing are clean.

Donations of old or faulty computers and other hardware are also welcomed as these can either be refurbished or recycled and the proceeds passed on to St Petroc’s. Donations of computer monitors and TVs cannot be accepted, due to charges associated with their recycling.