An iconic Cornish landmark on Bodmin Moor has just been sold for the first time in 40 years.

Jamaica Inn, the eponymous location of Daphne du Maurier’s famous novel, has been bought by Surrey business man Allen Jackson for over £2 million.

The 18th Century, 17-bedroom, smuggling inn was put on the market in early January by the Exeter based branch of Christie & Co, on behalf of former owners John and Wendy Watts, who purchased the Inn for £176k in 1976.

Matthew Smith, director at the Exeter branch of Christie & Co, said the sale had received an “extraordinary” amount of interest and that the time between launching instruction and exchanging contracts was the quickest that he had witnessed in his 12 years at the agency.

Jackson said: “I am delighted to have acquired Jamaica Inn and intend to breathe new life into this fantastic and historic location. Providing traditional and high levels of service are core to what I will be offering in the future. And, of course with the BBC adaption of du Maurier’s novel airing around Easter, I believe it is a very timely acquisition.” 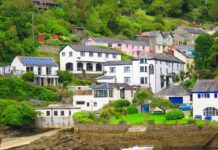 A new chapter for historic inn