Business and enterprise minister Mark Prisk has today announced a further £1.5 million investment in the development of wave energy technology during a visit to the South West RDA’s Wave Hub project at Hayle.

Prisk, who kicked off a two-day tour of Cornwall, said the additional £1.5 million grant from the RDA would allow wave energy company Ocean Power Technologies Ltd (OPT) to develop a larger version of its ‘Powerbuoy’ wave energy device.

It follows an announcement by the Government-backed Technology Strategy Board last week of a £7 million investment in nine projects aimed at developing wave and tidal technologies of the future.

OPT is the first company signed up to use Wave Hub, which is a £42 million project to create the world’s largest test site for wave energy technology, off the north coast of Cornwall.

Wave Hub is being installed on the seabed over the course of the next few weeks and is a cornerstone of the UK’s ambition to grow a world-class marine energy industry.

Prisk said: “This ground-breaking Wave Hub project is evidence of British engineering and offshore expertise – almost 80% of the value of contracts awarded so far have gone to UK businesses.

“The UK is already leading the way in marine energy, with 25% of the world’s wave and tidal technologies being developed here. This is a huge opportunity for UK business – the sector could be worth £2 billion by 2050 and it has the potential to create up to 16,000 jobs by 2040.

“But this is a young industry and it needs support to realise that potential. That’s why Government is continuing to provide £18.5 million of support for marine projects here in the south west. Today’s investment in OPT is further evidence of that commitment.”

During his visit the Minister was briefed by the RDA on the progress of Wave Hub, and plans to invest £15 million – including £5 million from central Government – in major infrastructure improvements around Hayle Harbour, to support the development of a new marine energy business park, creating up to 200 jobs.

Stephen Peacock, executive director for enterprise and innovation at the South West RDA, said: “This was a great opportunity to brief the minister on progress with Wave Hub, and for him to meet some of the many businesses and academics involved in developing a marine renewables industry here in the south west.” 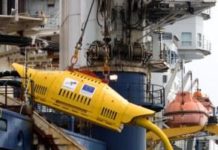 Three named to Wave Hub board