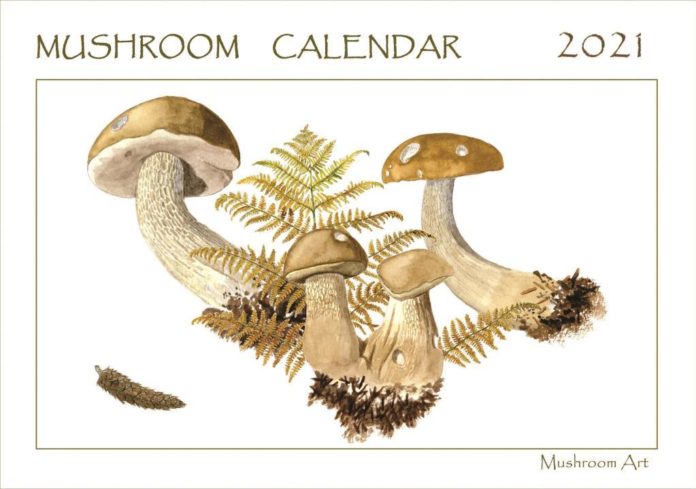 While lockdown has had a negative impact on many businesses, a Liskeard artist is reporting more positive times.

Peter Thwaites says people’s craving for nature during these difficult times has led to three times more sales of his fungi calendar.

“We’ve been producing this since 2004 and normally print 100 a year, which always sell out,” said wife Christine.

“The last two years, since it has been on Etsy, we’ve printed 20 to 30 more during December. This year we thought we’d be bold and print 115, plus a special order of 20 local view ones for the village tacked on the end.

“It went online in early October and sold out before the end of November, so we printed 30 more. These sold out within four days. We decided there was no point in reprinting again as most of them go to America and wouldn’t be dispatched in time for Christmas. So, we put an announcement on Etsy and websites inviting people to reserve copies for confirmation in the New Year if sufficient numbers made a reprint viable.

“The orders kept coming and by January 4 there were over 100 orders. So, we ordered 150 copies. The calendars arrived here, flat sheets collated for us to punch and bind, on the Wednesday morning by which time all 150 had sold. We could have sold more as the visits and ‘favouriting’ on Etsy were astounding.

“The village shop and Post Office helped us set up a Drop & Go account so we wouldn’t be holding people up. Altogether we have sold 295 mushroom calendars this year, which is unprecedented.”