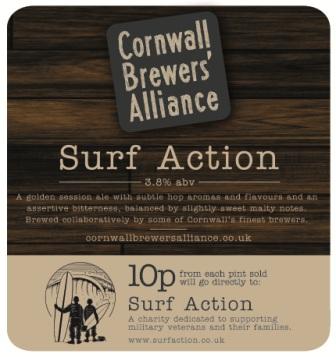 The Cornwall Brewers’ Alliance (CBA) – formed last year as a networking group for the county’s beers and to promote the huge number of Cornish brews now on the market – has produced its first collaboration beer, which goes on sale this week to raise charity cash.

Surf Action (3.8% ABV) is a “golden session beer subtly hopped with Aurora and Simcoe varieties, with a grapefruit twist from Cascade. It has an assertive bitterness balanced by slightly sweet, malty notes”.

The beer is named after a Cornish charity which will benefit from 10p for every pint sold. Surf Action is dedicated to supporting military veterans and their families, including reservists, and helping them adjust to civilian life, with particular emphasis on helping those suffering from post-traumatic stress disorder.

CBA members devised recipes for Surf Action and voted on their favourite in a secret ballot to see which would be created at Sharp’s Brewery, Rock, where head brewer Carl Heron was a willing and welcoming host.

Heron said: “It was a pleasure to host the first collaborative brew of the Cornwall Brewers’ Alliance. We had an informative and enjoyable day brewing this excellent first offering.”

The beer can be found at various pubs and bars throughout March and into April.

Download the latest issue of Business Cornwall magazine to your iPad