The Cornwall Development Company has announced the celebrity speaker for the Cornwall Business Awards 2015, the most prestigious business awards event in the county, which celebrates its tenth anniversary this year.

The guest speaker will be Dr Maggie Aderin-Pocock MBE, the popular space scientist whose passion is presenting science to a general audience.

She presented the BBC 2 programme, ‘Do We Really Need the Moon?’ which earned her the ‘new talent’ award at the prestigious Women in Film and TV Awards in December 2011.

Dr Aderin-Pocock went on to present ‘Do We Really Need Satellites?’ and was one of the main scientists on Channel 4’s Brave New World.  She is currently presenting the new series of Sky at Night on BBC 4 and Mini Stargazing for Cbeebies.

The Cornwall Business Awards are run by Cornwall Development Company in association with Business Cornwall magazine and Cornwall Chamber.

Dr Aderin-Pocock said: “It is a great pleasure to be speaking at the tenth anniversary Cornwall Business Awards. As a space scientist, my interest has always been in aiming high and breaking frontiers. Cornwall’s history includes many examples of innovation and individuals taking brave steps forward into the unknown.

“The businesses that enter the Cornwall Business Awards are all run by people who take this approach and are changing the game, both for their own businesses and Cornwall as a whole.”

Dr Aderin-Pocock studied at Imperial College where she obtained her degree in Physics and her PhD in Mechanical Engineering. Since then she has spent much of her career making novel, bespoke instrumentation ranging from hand held land mine detectors to an optical subsystem for the James Webb Space Telescope.

Suzanne Bond, chief executive of Cornwall Development Company, added: “We are ‘over the moon’ that Dr Aderin-Pocock will be joining us at the Awards Ceremony in May!

“It is exciting times for Cornwall as we begin to further enhance develop our own space expertise. The work at Goonhilly and Aerohub at Newquay Cornwall Airport is beginning to make its mark worldwide. Cornwall has what it takes to aim for the stars and this is a timely opportunity to acknowledge and celebrate this.”

Around 350 business leaders are expected to attend the glittering awards dinner at St Mellion International Resort on May 14.

Any business based in Cornwall or the Isles of Scilly can enter one or more of 14 award categories. Entries for the Cornwall Business Awards 2015 should be made online and the closing date for entries is March 15. For full details, click here. 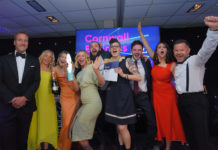