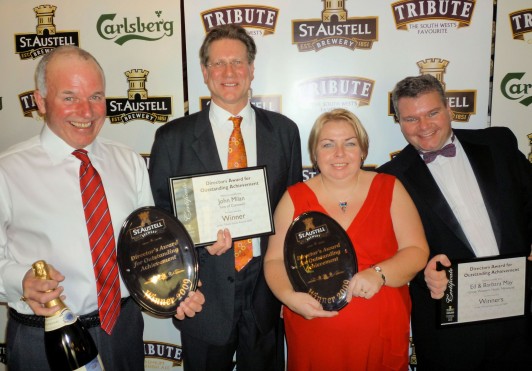 One of the south west’s most glittering awards nights has celebrated the hard work, professionalism and commitment of landlords, restaurateurs and hotel managers across the St Austell Brewery estate.

The annual Tribute Estate Awards, held at Atlantic Hotel, Newquay, saw 280 people from St Austell Brewery establishments across the region gather for a gala dinner ceremony and to see the winners announced in 17 hotly-contested categories.

Individual awards were handed out recognising excellent customer service, training, marketing initiatives and exceptional environmental practice. Special awards were also given out rewarding managers and tenants of the year and for the first time a Directors’ award for outstanding achievement.

Guest speaker Andrew Pring, former editor of the Morning Advertiser and now editor of BII Business Magazine, praised everyone working across St Austell Brewery’s 174 pubs, hotels and restaurants in Cornwall, Devon and Somerset despite a challenging time for the licensed trade industry.

Adam Luck, estate director at St Austell Brewery, said: “It’s been a year of extremes, with huge economic challenges and of course no sign of the barbecue summer we were promised.

“Yet, in the midst of this St Austell Brewery enjoyed record beer sales, witnessed truly amazing performances from some of our pubs and won high profile awards along the way. It’s a testament to the quality of our pubs and staff and the Tribute Estate Awards is about celebrating those achievements and saying a big well done and thank you to all the team.”

Awards were handed out to pub managers, tenants and staff in recognition of their role in helping the Brewery’s reputation grow locally and nationally.

This year’s New Tenants of the Year Award was handed to two deserved winners after the judges couldn’t split them. The award was shared by Mark Twynham from the Bishop & Wolf, St Mary’s and Gary Roberts & Julie King from the Cromwell Arms, Bovey Tracey, Devon.

For the first time, a special Director’s Award for Outstanding Achievement was handed out by MD James Staughton – with two winners receiving the honour in its inaugural year.

Ed and Barbara May of the Great Western Hotel, Newquay received the award in recognition for their work in managing a major refurbishment of the hotel and then taking it on to become a huge success.

The second award went to John Milan, who over the past 23 years has held a total of 18 tenancies with St Austell Brewery, and currently holds the tenancies for award-winning St Austell Brewery pubs in Cornwall and Devon, including The Three Crowns Hotel, Chagford, Devon and the highly successful Pandora Inn and Punchbowl and Ladle pubs in Cornwall.

This year’s award for Cask Ale Pub of the Year (managed) was won by the Harbour Inn Porthleven. The same award for a tenancy pub was awarded to the Edgcumbe Arms, Cremyll.

In line with St Austell Brewery’s commitment to become one of the UK’s greenest Brewery’s, an award recognising exceptional environmental practice was also handed out. This year’s Environmentally Sustainable Business of the Year was picked up by the New Inn, Tywardreath in recognition of Steven and Christine Holland’s total commitment to minimising their pub’s impact on the environment.

The standard remained high in the food category, with the accolade for Catering Excellence Business of the Year (managed) awarded to The Lifeboat Inn, St Ives. Paul Ripley and Sarah Allen at the St Kew Inn, St Kew, scooped the same award in the tenancy category, coming hard of the heels of their recent accolade of receiving a Michelin Bib Gourmand, the only pub in Cornwall to have won this prestigious national award for good food at moderate prices.

The title of Training pub of the Year was presented to Kim Barker in recognition of her commitment to staff development, at the Ship Inn, Pentewan.

The Victoria Inn, Salcombe, South Devon run by Liz Sheldon and Tim Hore scooped the title of Marketing & Innovation Business of the Year (tenancy) and the Pedn Olva Hotel, St Ives was crowned winner in the managed category.

The award for Wine House of the Year was presented to The Golden Lion, Menherion celebrating the pub’s imaginative, distinctive and high quality wine selection and service.

Community Pub of the Year was awarded to the Kings Arms, Lostwithiel run by Michael and Kathryn Townsend and the Earl of St Vincent, Egloshayle, Wadebridge retained its title of Pub Floral Display of the Year.