One of the region’s foremost champions of women in construction is using a career milestone with Midas Construction to call for more women to consider a career in the industry.

As business development coordinator, Tessa Purdy is involved with a number of schemes across the region to show women and young girls that a career in construction is “fulfilling, well paid and rewarding”.

The 31-year old is a shining example of her own mission statement, working within a traditionally male-dominated world since leaving university.

And now she is toasting five years with Midas Construction, a company she champions for helping her not only learn and progress but also for its drive towards equality.

She said: “It could be seen as quite intimidating coming in to this industry as a woman, but Midas helps you to find your voice and  has allowed me to open up people’s eyes to let them know about the many and varied jobs that make up construction.

“Yes, we do need workers on site, something women can do just as well as men, but we also need the likes of quantity surveyors, designers and project managers.”

Bringing more women into the industry is an issue close to her heart with Purdy also a vocal member of organisations South West Women in Construction and Women in Property.

She added: “Thanks to these groups I get to meet with influential women in and outside construction and we are really starting to have our message heard.

“Encouraging men and woman to embark on a building career is a hot topic at the moment as the industry does need to build its workforce again after the recession.

“There is a real push to get women into construction because there is no reason why they can’t do the same jobs as men.”

One of the highlights of her engagement role has been when a group of young Plymouth schoolgirls were invited to spend an afternoon looking round the city’s multi-million pound Millfields office development.

She added: “So many of the children who visited had never even thought about a career in construction but they came away inspired by the thought of becoming architects and project managers.

“It was really rewarding to see that we had opened up a whole new world of opportunities for these young girls, especially as construction had been an area that had never crossed their minds before.” 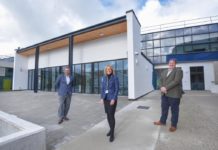 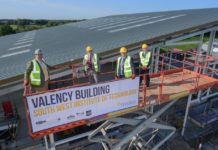 Topping out of new technology building 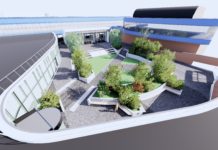