Groundworks are well under way in preparation for the foundations to be installed for a new hub for creative businesses being built in Penzance.

The Penzance Creative Cluster being built by Midas Construction at  Causewayhead will provide up to 30 modern studios and flexible workspaces for creative sector businesses, from high tech digital companies to visual and performing artists.

Over the years the site has played host to a car park and cattle market and still contains buried remnants of the 18th century former Penzance Old Reservoir, which had previously been covered over with a concrete capping.

The first stage of the project has involved carefully removing the capping, excavating around the reservoir, backfilling with stone and compacting the site in readiness for piled foundations for the new three-storey building. Midas has worked with an archaeological surveyor to record the reservoir structure and monitor construction to ensure it is protected.

With the £5.8 million project an important part of Cornwall Council’s wider strategy to regenerate and reinvigorate Penzance town centre, the Midas team were joined on site by Cornwall councillors and officers to see work taking place and to carry out a ceremonial groundbreaking.

Mark Jones, Operational Director at Midas Construction, part of the Midas Group, said in addition to generating future employment opportunities for Penzance when complete, Midas was working with its established local supply chain to maximise the positive local impact of the project during the construction phase.

“Our aim always at Midas is to create a positive legacy in the communities where we operate. We are delighted to be working in partnership with Cornwall Council on this important regeneration scheme for the town and to be using the build of the Penzance Creative Cluster to kick-start the process of boosting employment and skills.”

Stephen Rushworth, Cornwall Council cabinet portfolio holder for economy, added: “Penzance is home to a significant number of businesses working within the cultural and creative sector. It’s a sector which is fast growing in Cornwall and a key part of the Cornish economy. This dedicated workspace will not only help encourage collaboration and innovation, but also bring jobs and businesses into the high street – a crucial step to revitalising the town centre.”

The Penzance Creative Cluster is being funded by Cornwall Council (£2.6 million) and the European Regional Development Fund (£3.2 million).

The steel-framed building will include studio space over three floors and has been designed externally to incorporate existing stone walls on the site at lower level, with cladding above. 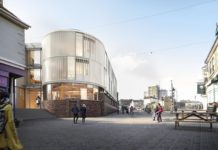