A social enterprise aiming to renovate some of the thousands of run down, empty properties in Cornwall while training the ex-service community and young people who are out of work has completed its first project.

Rebuild South West was set up by Helston-based Craig Little, who left the Royal Navy from RNAS Culdrose in 2011 after a career in a variety of flying operations.

His ideas were supported by the School for Social Entrepreneurs (SSE) Cornwall, which was originally supported with ESF (European Social Fund) Convergence investment.

Little said: “Having served the Royal Navy for over 26 years I have experienced first-hand how difficult it is for ex-service people to readjust and achieve the transition into civilian life and employment.

“Although resettlement training was and still is very effective, it is gaining the work placements and taking things to the next level that people are struggling with.”

The first empty home project was a derelict, 150-year-old sail loft in Newlyn owned by a Penzance-based charity.

Little explained: “We provided the funding, which will be redeemed through future rental payments. By utilising the skills of local tradesmen we carried out a lengthy refurbishment which included new roof, new section of external wall, re-wiring, re plastering and a new kitchen and bathroom.

“In addition to that workforce we also offered a work placement to Penzance Job Centre who signposted us four local unemployed young people who came from a variety of different backgrounds and really were in need of some direction and a chance to prove to themselves what they are capable of.

“Closely mentored on site at all times by an ex serviceman, the results and outcomes were very satisfying.  The property will be handed over to a homeless organisation to provide much needed housing.” 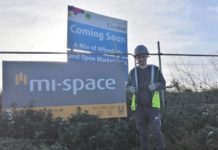