Staff at a leading local law firm are celebrating the news of a bumper bonus this year.

Stephens Scown LLP, which has offices in Exeter, St Austell and Truro, informed its staff that this year’s bonus will be £3k – more than double the amount last year when the average payout was £1.3k.

The bonus applies to everyone, regardless of grade, from secretarial and admin staff up to fee-earning lawyers.

But it is also due to the introduction of a new ‘John Lewis’-style shared ownership model in which everyone has the opportunity to effectively own a portion of the firm and share equally in the bonus scheme.

The new ownership model generated headlines when it was announced in February, with Stephens Scown being the largest law firm in the country to adopt such an approach.

Robert Camp, managing partner at Stephens Scown, said: “I am delighted that we’re able to share our success with staff in this way. They deserve it!  We have had a very strong year, growing the business through a constant focus on client service and hard work.

“Our new shared ownership model enables us to share the rewards equally right across the firm.  We are one team, and now we have one staff bonus scheme to match.

“I believe it’s the right thing to do and also that it will motivate and inspire everyone in the firm to keep performing at the highest level so as to drive up the rewards in the future too.  It’s a win-win for us all.” 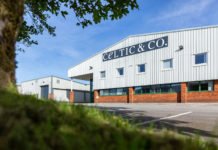