Steve Gilbert, the prospective MP for the new seat of St Austell & Newquay, which includes the clay villages, has warned that the eco-town plans unveiled today by Imerys and Orascom “are not a done deal” and that “key questions on jobs, schools and transport links” remain unanswered.

The Lib Dem campaigner was speaking on the day that Imerys and Orascom announced the plans for a 2,000 home development at Baal Pit and West Carclaze and a marina development at Par Docks.

Gilbert said, “Ever since this idea was first suggested I’ve been very clear that the community must be consulted at every step. This isn’t a done deal and the scheme still has to go through the local planning process – people’s concerns must be properly listened to. There remain some vital questions that need answers: where are the jobs coming from, what about schools and other facilities, and transport links. I’ve always said that the devil will be in the detail of these proposals, and until we see the details it’s far too early to welcome this announcement.”

Talking about how the proposed 2,000 homes by Imerys and Orascom will impact on the Wainhomes proposal for 1,500 new homes at Scredda,  Gilbert added: “It would simply be nonsense to have an ‘eco town’ at Baal and then a ‘non-eco town’ down the road at Scredda. It would be a gross overdevelopment of the area and put a huge strain on local resources.”

“St Austell must not be swamped with developments that don’t address local need and will overburden the town’s services. Both as a candidate and hopefully as an MP I will be making sure that local people’s views and needs are put first as these plans develop.” 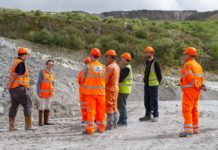