Warrens Bakery has announced the opening of its first stores in the City of London.

Chairman Mark Sullivan has revealed major plans for growth, with 1,000 stores targeted throughout the UK over the next few years.

As the country continues to embrace all things baking, Warrens has partnered with recipe writer and youngest-ever Bake-Off star, Martha Collison, to open the first tranche of London stores.

Collison is working with the Warrens Bakery team to highlight the importance of craft baking in contemporary Britain. Following a visit to Warrens in St Just, she said: “I think that there is still plenty of room for brilliant, traditional British bakeries in London, which is why I’m so excited to see Warrens Bakery launch its first London store.

“Britain is wonderfully multicultural, bringing the possibilities to try bakes from across the globe, but holding on to British bakes and bakeries is so important. I love the bakery culture in France, with people visiting nearly every day to pick up a loaf of bread or a few parties, and I dream of seeing the same happening in the UK.”

Sullivan added: “We are well known by tourists who visit the West Country, many of whom have asked us to open up near them. Now, with our expansion drive, we are doing just that. London is a very special part of this journey; it’s symbolic. By establishing stores at the heart of the capital, we’re showing that we are serious about taking affordable craft bakery to the nation.”

Warrens Bakery will be releasing a series of videos and recipes with Collison to ‘Uncover the Craft in British Baking’, which includes a behind the scenes trip to the main production facility in St Just. 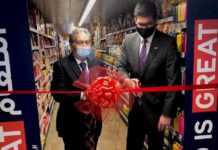