A highly effective and visual sign of the times can currently be spied down the Fal estuary.
During periods of economic decline, the river acts as lay-up for large ships from across the world, as owners are forced to take them out of service due to lack of demand. Over the past eight years, the moorings have rarely been used, as most ships around the work have been in employment.

Now, however, the Fal is rapidly approaching capacity. Recently two huge 40,000 ton vessels joined the throng  – Challenger II and Adventure II – which in better times transport coal between the UK and the Baltic.

But they provide Carrick Council with a useful revenue stream. Together with the other laid-up vessels, they pay rent ranging from just under £100 a week for the smaller vessels up to over £730 a week, excluding vat, for the 30,000+ tonners.

Port of Truro harbour master Andrew Brigden explained: “Historically, the River Fal is a barometer for the world’s economy. If the river is empty, it means freight is up and all the ships are working. If the river is full of ships, times are bad with ships out of work standing idle. 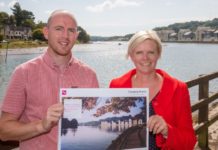