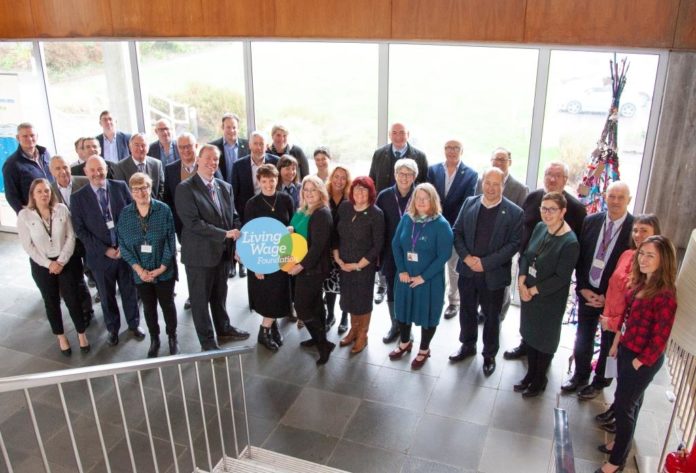 Penzance is looking to achieve another notable first under plans being developed between local employers, Penzance Chamber of Commerce and Cornwall Council.

Back in 2017, Penzance became the first town in Britain to receive ‘plastic-free’ status from Surfers Against Sewage.

Now it could be set to become the first Living Wage Accredited Town in England. The real living wage is based on the cost of living and is voluntarily paid by nearly 6,000 UK businesses and organisations. The current rate is set at £9.30, a pound more than the amount set out by the UK Government.

The benefits for businesses paying a Living Wage are many and far reaching; reduced staff turnover and sickness, an improvement in morale and productivity and finally beyond that, more money is spent locally boosting the economy.

Leader of Cornwall Council, Councillor Julian German, said: “We are delighted to be working with a and supporting a group of dedicated employers in west Cornwall, who have clearly identified the benefits of paying the Real Living Wage. The project is very much in its early stages, but the passion and commitment being shown so far is excellent.”

In 2015 Cornwall Councillors pledged to adopt the Living Wage Foundation rate rather than the minimum wage as the lowest rate of pay for all directly-employed staff. Work is now underway to extend the scheme to the contractors we work with, ensuring their staff are also paid at the higher rate.

German continued: “The plan is ambitious; to substantially increase living wage jobs not just in in the Penzance area, but across Cornwall. We know the transformative effect the real Living Wage has on people and their families. The leadership shown by local employers and councillors is an example for others to follow.

“Cornwall is one of the poorest areas of northern Europe and historically, has seen some of the lowest wages. So, I am delighted that Cornwall Council is taking a leading role in trying to change this.”

It’s hoped that under the plans key local employers will become involved in the pilot project such as schools, GP practices, care homes and the hospital. The pilot will also be extended to include businesses in Newlyn, Mousehole, Heamoor and Gulval.

Independent Councillor for Penzance East, Tim Dwelly, started the campaign: He said: “I am proud of the work being done by local employers and the commitment they are showing to achieving Real Living Wage accredited status.

“Not only is this great for local employees, there is a lot of evidence to show the impact this can have – not only on those receiving the additional money, but the wider financial benefits for the whole community.  And although this is in the early stages, the drive and commitment is there to make this a massive success.”

This morning (Feb 24) a celebration breakfast was held at New County Hall, which brought together some of the businesses committed to the Real Living Wage and those businesses keen to find out more, as well as Cornwall Councillors. Delegates heard from council leaders and Living Wage business owners about the impacts the scheme has had on them and their staff.