In the past few days, around 360 businesses in Camborne will have received a postal invitation to learn more about the BID initiative which is already operating successfully in Truro and Falmouth and a total of 110 towns and cities across the UK. Newquay’s BID was approved last month and has just started its five- year term.

BID schemes are ‘business led for business benefit’ and operate in clearly defined geographical areas. Through extensive consultation, businesses themselves identify the improvements needed that will make a real difference to their trading prospects. These project ideas are then developed and priced before being published in a final proposal on which eligible businesses have the opportunity to vote ‘yes’ or ‘no’ in a 28-day postal ballot that is held.

If the BID is approved, these improvements are collectively funded by every eligible business ratepayer, including those in the public and voluntary sectors, contributing a percentage of their rateable value.

For Camborne, a 2% levy would create a ring fenced fund of over half a million pounds over a five-year term, money that would be managed by the private sector, through a new company operated by the businesses, to deliver the BID programme.

A presentation and discussion evening is being held at Camborne Rugby Club next month (Monday May 9 at 6pm), where businesses can learn more about how the BIDs work, and what has been achieved by the Truro and Falmouth schemes.

George Le Hunte, chairman of BID Camborne Steering Group, said: “This is a fantastic opportunity for businesses in Camborne to have their say on what should be done to improve our town, and to really make it happen.”

If the general feedback to a Camborne BID is positive at this early stage, consultation with businesses will take place during 2011 leading to a spring 2012 ballot, meaning that project delivery could begin in April 2012 with funds available until March 2017.

If you are a business in Camborne and have not received an invitation to the presentation and discussion Evening, contact Mel Richardson, BID development officer on 01872 224733 or email mrichardson@cornwall.gov.uk 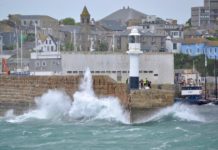 Camborne residents have their say