St Austell-based Nationwide Print is set to shut down next month.

The business, which began life as H Hocking & Son in the mid-1930s and was named Environmental Company of the Year at the 2018 Printweek Awards, will close its doors for the final time on July 15.

Citing the challenging trading conditions in the printing industry, owner Julian Hocking said he made the difficult condition following “an offer I couldn’t refuse” to lease the buildings that house Nationwide Print.

“The pandemic gave us time to reflect on how we were doing and where we were heading,” he said. “Suffice to say that while the property side of our business is still growing fast, it’s getting harder to make a profit on printing.

“Then, in March, I received an offer I couldn’t refuse to lease the buildings that house Nationwide Print. So, I had to put my head before my heart and make the difficult decision to remodel the business. From now on, that means giving up printing and focusing purely on property.” 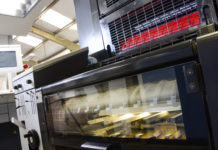 Cornish printers up for PrintWeek Awards