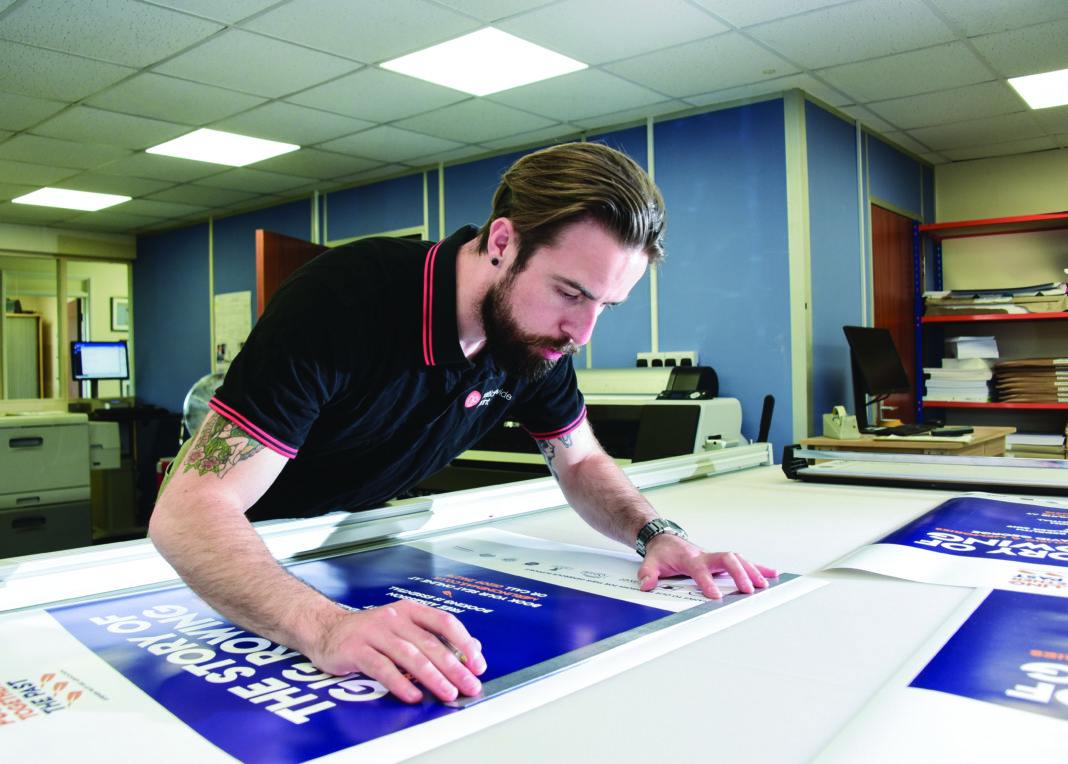 Sustainability is firmly at the top of the agenda for most households and organisations, and Cornish businesses are helping to drive the agenda. One such business is Nationwide Print, whose printing services have become a magnet for other green enterprises – locally, nationally and internationally.

At a time when a company’s environmental record can be either a burden or a boon, Nationwide Print is nailing it.

For nearly a decade this St Austell-based printer has put green credentials at the heart of its decision-making processes, proceeding with an ambitious development plan for sustainable growth at a time when many other printers were losing the battle against the unstoppable rise of digital marketing.

Making such bold investments in renewables, energy efficiency and behaviour change was risky given the tough times the print industry was going through, but it paid off. Nationwide
Print was named  ‘Environmental Print Company of the Year’ at the 2018 PrintWeek Awards, the flagship awards scheme for the UK industry.

Later this year it will compete at the same awards for the title SME Printing Company of
The Year.

The firm is now well-placed to take advantage of a resurgence in print marketing and
independent publishing, backed by its environmental credentials. Major brands are increasingly turning back to the analogue world of the printing press to create beautiful assets and publications which have an aura of craftsmanship, value and longevity.

Digital marketing continues to thrive, of course, but its ephemerality is being counterbalanced in paper and ink.

When brands such as Armani and Rolex look to create valued print assets, they search
for a printer who can deliver to the highest standards, using the latest technology, with the least environmental impact.

Enter a Cornwallbased SME, which punches above its weight in the printing world.

Nationwide Print’s journey to environmental leader began in 2010 when MD Julian Hocking took part in an Eden Project initiative, the Green Foundation. His participation kickstarted
a series of bold investments in green technology and energy saving measures, including the installation of two large solar arrays, energy-efficient office lighting, exterior cladding, the purchase of a fully electric e-Golf and many other small but impactful initiatives. During quieter times and weekends Nationwide Print HQ exports to the grid, and overall about 65% of its annual energy use is provided by the solar panels.

“Sustainability is a founding principle of Made for Life Organics,” explains Amanda.

“Nationwide’s investment in renewables, energy saving and clean technology – as well as their Forestry Stewardship Council accreditation – helps us to minimise our impact on the world we live in. Nationwide are also fantastic in terms of quality and customer service, and they are competitive on price too.”

Robin Freight, compliance officer at St Austell Brewery, sees a shared environmental outlook as a major factor in the close relationship between the brewery and their printer. “We are striving to become a greener brewer, with significant investments in technology and systems to reduce our carbon footprint at our head office, distribution depots and managed houses” explains Robin.

“Having another local business with a brave, outward-looking vision and a green agenda
is really helpful – it spurs us on, and we learn from each other.”

Julian considers that part of the reason for his firms’ success lies in Cornwall itself: “Living and working in such a beautiful place certainly inspires us to protect the natural environment,” he explains. “The ‘Cornwall brand’ is also hugely positive.

Our international clients know and respect Cornwall as a region where natural beauty, human creativity and environmental stewardship coexist.”

Julian believes that in these times of heightened awareness of green issues, Cornwall has a huge opportunity to maximise its status as a regional leader.

“We’ve got outstanding natural resources for renewable energy generation, and we have business and community leaders who care passionately about the environment,” he says.

“But the one most important thing in my opinion is the collaborative outlook of Cornish businesses. People want to get around the table and work together to make progress and share bestpractice.”

Another Nationwide Print customer, Matt Hocking (CEO and founder of Leap, a B-Corp
accredited ‘design agency for change’) agrees. “Cornwall is already a powerhouse and a leader in sustainability, but there is always a need to push forward – to find new ways of sharing and using our businesses as a force for good,” he explains.

“Environmental impact reductions are a great first step, but attracting the right people and
retaining them is an area I feel all business can focus on. Investing in people and supporting their growth – for example through learning and volunteering – is really important for nurturing sustainable communities.”

The Eden Project, which uses Nationwide Print for much of its printing needs, set an
example in this area earlier this year when it closed for a day during the busy June half term week. Peter Stewart, executive director at the Eden Project, said: “With the 24/7 culture we now live in and with businesses open 7 days a week, there’s less and less time for people to connect with their communities and take stock of what’s around them, so we made the decision to give staff the day off to reconnect with their neighbourhoods.”

Travel to work is another area where progressive businesses like Nationwide Print and Leap
are leading the way. Leap offers staff a slow travel bonus, while Julian encourages his staff to reduce their carbon emissions with free access to an electric vehicle charging point on site, which is powered by solar energy.

Watergate Bay Hotel is another business in this green cluster which is driving the sustainability threshold ever higher. As well as an integrated system of renewable energy
technology and impact reductions schemes – including the choice of Nationwide Print for much of its print marketing – Watergate galvanises its team with regular beach cleans.

“Every day our team spend some time cleaning the beach,” Will Ashworth, CEO at Watergate Bay Hotel explains. “We organise staff beach cleans every season and work with the Marine Conservation Society (MCS) and Surfers Against Sewage (SAS) to run regular public beach cleans. It has a positive impact on community resilience, health and wellbeing as well as the environment.”

As Julian explains, it’s often the little things, like picking up plastic on the beach, that make the most difference and have a knock-on effect. “We recently gave all our staff a Chilly’s drink bottle to help reduce single-use plastic, both at home and at work. It’s just a small thing, but it’s important for people to feel that they are part of the solution, part of a movement.”

Julian says he is continually inspired and motivated to push forward through conversations with other organisations in Cornwall, not least the team from The Lost Gardens of Heligan, who have been pushing the boundaries of what it means to be ‘green’ for decades.

“Heligan is a real inspiration, and an organisation we are very proud to work with,” says Julian. “Every year tens of thousands of people visit the gardens and almost everyone
picks up a map or a story leaflet. Everything we print for Heligan is produced right here in St Austell using renewable energy, efficient technology and a skilled local workforce, and transported in our electric e-Golf. That’s the kind of future we need to be aiming for if we
want to save the planet!”