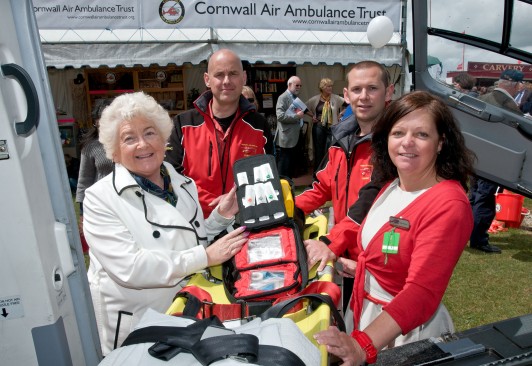 The chairman of Cornwall Council has chosen Cornwall Air Ambulance Trust (CAAT) as its charity for the year.

Cllr Pat Harvey visited the trust at the Royal Cornwall Show, where she found out more about the air ambulance’s vital work and plans for a new headquarters new Newquay Cornwall Airport.

The development, which has received £1 million of ERDF Convergence funding, is within Cllr Harvey’s ward of St Columb.

Cllr Harvey said: “Cornwall Air Ambulance Trust is an incredible charity and very relevant to our county – to tourism, to transport, to everyone.

“It’s a life-saving service that’s been running for nearly 25 years from the support of people of Cornwall. I’m very proud to be associated with it.”

Chief executive of CAAT Paula Martin added: “We are absolutely delighted that Cllr Harvey has come on board to support us in what is a key year for the charity’s strategic development.

“We’re moving ahead with work on our new charity HQ and we are also approaching our 25th year of operations.

“It’s fantastic to have the backing of Cornwall Council’s chairman as we continue to support communities and save lives.”