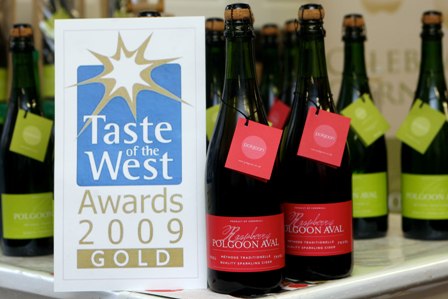 Penzance Vineyard, Polgoon, has added to its list of accolades, receiving a Gold and Silver Award at the Taste of the West Awards for two of its latest products.

Polgoon which was a derelict farm on the outskirts of Penzance in 2002 until it was rescued by husband and wife team Kim and John Coulson, took a Gold Award for its Sparkling Raspberry Aval and a Silver Award for its very latest drink, a sparkling Polgoon Peren (a Perry), which will be officially launched at Hugh Fearnley Whittingstall’s River Cottage Canteen later this month.

Both products undergo the Methode Traditionelle double fermentation process used by Champagne makers in France, the Raspberry Aval a combination of apples and raspberries that are blended together, the Peren made using the finest English pears.

Kim said she was delighted that the Raspberry Aval had been recognised yet again and that the Peren, ahead of its official launch, has also taken the Silver.

“Its fantastic that our products have been recognised in this way by the Taste of the West Judges, and these awards give us added confidence that as a business we are continuing to move in the right direction and are creating a range of drinks that people really do enjoy.

“The Raspberry Aval has exceeded all of our expectations and keeps going from strength to strength, and really seems to have hit the market and captured people’s interest at just the right time, whilst for the Peren to get a silver before it has even been officially launched is a real boost for us,” said Kim.

But for two years of appalling weather, which yielded very few grapes from the 3000 vines, the award winning drinks may never have seen the light of day at all, as Kim explained:

“The poor weather of 2007 and 2008 left us with very few grapes for producing our wine. But we were determined not to be beaten so we started experimenting with our apples to see if we could create something fresher and more exciting that a traditional cider, the result being our original Aval, joined this year by the Raspberry Aval and now by using pears, with the Peren. You really could say in this case that every cloud has a silver lining, which is why awards like these from the Taste of the West are so important to us.

“Fortunately, although it hasn’t been the best year once again weather wise, we are optimistic that the vines will yield us a much better crop of grapes, so we can also produce the Polgoon Rose in addition to the Aval and Peren,” said Kim.

The new Aval Rose is increasingly catching the attention of bars, restaurants and stockists across the South West and the UK, from Rick Stein’s Deli in Padstow and the River Cottage Canteen in Axminster, to Fortnum and Mason and the Whole Foods Market in London. It is also now in stock at the Eden Project and is catching the eye of national retailers.

For a list of stockists and retailers and to buy Polgoon’s products on line visit www.polgoon.co.uk or contact Polgoon on 01736 333946.