The Isles of Scilly Steamship Group has appointed Red Funnel Group chairman Kevin George to its board of directors.

George, who spent much of his career in the airline industry with British Airways and Monarch before joining Red Funnel as CEO five years ago, replaces Henk Wiekens, who has stepped down after serving 12 months on the board.

Red Funnel operates vehicle and passenger services in Southampton and the Isle of Wight, transporting in excess 850,000 vehicles and 3.4 million passengers per annum. He became chairman of the Red Funnel Group in 2018.

He said: “I am delighted to be joining the Steamship Group and look forward to assisting in the development of the business in both its shipping and aviation activities to provide it’s lifeline services to the Islands. It is a fascinating time to be joining the company as it addresses some key performance and asset challenges.”

Steamship Group CEO, Stuart Reid, added: “Kevin will bring both marine and aviation expertise and experience to the board of directors and he is a strong appointment for the group.

“I am sure he will provide valuable input to our marine asset replacement programme as well as building on our drive to improve operational service. I would also like to pass on my thanks Henk Wiekens who has provided valuable support and input to the company over the last 12 months.”

The Isles of Scilly Steamship Group was founded by islanders almost 100 years ago to provide lifeline passenger and freight services to the Isles of Scilly. It operates eight fixed wing Skybus aircraft from Land’s End, Exeter and Newquay airports, and the seasonal Scillonian III passenger ferry from Penzance between March and November.

The £17 million turnover business employs 228 staff, making it one of the biggest employers in the region. 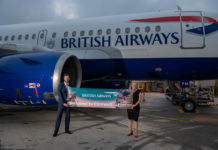