Trade, Investment and Business Minister Lord Davies of Abersoch is urging south west firms to take a fresh look at India, a market with a middle class that is 300 million strong and that produces half a million technology graduates every year.

Lord Davies will visit India from 14 to 17 September. Ahead of the G20 meeting in Pittsburgh, he will discuss trade with his ministerial counterparts, appointed after May elections that brought in a new government. He will visit Nagpur, the ‘zero-mile’ city at India’s geographical heart, and Mumbai.

“India is on the move and we must move with it,” Lord Davies said. “UK firms must rethink India.

“It’s been over a decade since outsourcing was the buzzword. Now innovative Indian and UK firms are working together at the top end of the industrial spectrum – on pharmaceuticals, electronics and advanced manufacturing. India’s talent, confidence, energy and entrepreneurial spirit must be seen to be believed.

“The UK and India are natural partners of choice. In forums such as G20, we are standing shoulder to shoulder to promote global trade and economic liberalisation, which is vital to bring prosperity and jobs to hundreds of millions of people around the world,” he said.

The investment flows both ways. In Delhi, Lord Davies will visit the Ambience shopping mall, the largest in India, where Marks & Spencer, the Body Shop and Debenhams have been successfully established. He will also visit the Ballabgarh plant of JCB, the market leader in India where every second construction vehicle is a JCB.

Lord Davies will go to Nagpur, one of nine Tier 2 cities offering exciting opportunities for UK firms. Design and engineering firm Scott Wilson is working on the giant MIHAN project that will transform the city into India’s logistical hub, creating 400,000 jobs.

“I am delighted to visit Nagpur, one of the engine rooms for India’s growth. UK firms should look beyond the obvious destinations of New Delhi, Mumbai and Bangalore and explore the potential of emerging cities such as Nagpur, with UKTI as their guide,” Lord Davies said. 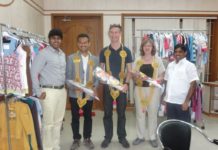