16 acres of sunflower seeds have just been drilled by Nick Dymond on his farm at Trispen near Truro. When the seeds are harvested in the autumn it’s over to Jack Baines from Hard Pressed Cornwall who will cold press the crop to produce high-quality sunflower oil.

There are only a handful of commercial sunflower growers in the UK who produce feed for birds. This is the first crop known to be planted in the UK destined for human consumption.

Jack Baines, a former chef from nearby Carnon Downs, started a culinary revolution just over a year ago when he founded Hard Pressed Cornwall. Swapping the hustle and bustle of life in the kitchen for handcrafting pure, flavoursome cuisine oils.

The brand’s rapeseed oil is produced from crops grown in north Cornwall and Baines was keen to source the sunflower seed for his products within the county.

He said: “This joint venture was inspired by the recent push for consumers to ‘buy local’. We are a proud nation and fully believe we are capable of being self-reliant, so this project aims but that to the test. With changes in climate and technological advancements in agriculture we have never been in a better position to challenge what can be achieved on home soil.

“Cornwall is the obvious place to start, not only because it’s home, but our agriculture is special, for whatever reason, local produce just tastes better. We also hope the sunflowers will bring a splash of colour and few smiles, offering something potentially more important to the local community during these uncertain times.”

Impressed by Baines’ products and ambition to source locally, the collaboration also provides many other opportunities.

Dymond said: “It’s a great break crop for replenishing soil health and structure, other crops generally extract more goodness from the soil than replace it. There’s also a new income stream which we can have an even greater share of.”

“The residue from the sunflower seed pressing contains a very high, easily digestible source of protein and will be fed to our livestock. Reducing the need to import protein in the form of South American Soya beans and reduces our carbon footprint.”

Several acres of sunflowers in full bloom will give the declining bee and bird populations a much-needed boost, which is an added bonus for Dymond.

“Agricultural methods employed today have certainly had a negative effect on bees and birds. As farmers, we need to take drastic action to help reverse this trend.”

In light of the current difficult times, the duo have distributed more than 100 packets of sunflower seeds to families in the villages of Trispen and St Erme. 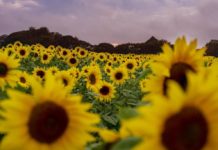 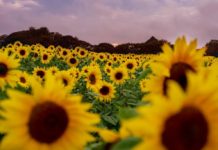 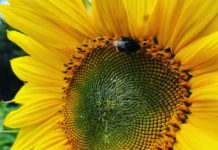