The Islands’ Partnership, the official destination management organisation and business lead for the Isles of Scilly, has appointed Andrew Sells as its new independent non-executive chairman.

Sells is currently chairman of Natural England, the national body responsible for advising the Government on the natural environment – a position he is due to step down from later this month after five years in the role. He will then take up his new position at the Islands’ Partnership in February, serving an initial three-year term.

Working alongside the Islands’ Partnership Board and executive team, Sells succeeds former chairman James Berresford, who stepped down at the end of last year after a three-year tenure.

The incoming chairman is tasked with helping to drive forward the growth of Scilly’s vital tourism industry and the wider economic prosperity of the islands.

“I am delighted to be given this opportunity to chair the Islands’ Partnership Board,” Sells said.

“The Isles of Scilly hold a special place in the hearts of my family. All generations have been visiting this tranquil haven for many years and I regard it as a great privilege to be asked to help shape the future of the islands.” 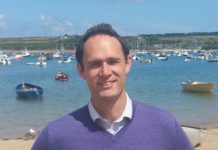