The initiative, worth more than £1 million, has been agreed following extensive work with airport owners Cornwall Council, operating company Cornwall Airport Ltd and the South West Regional Development Agency (SWRDA). £303k of the total has been approved from the Convergence Programme.

AgustaWestland Training Organisation, which is part of Westland Helicopters Ltd, will run the helicopter flight training programme for up to 50 students a year covering specific helicopter skills such as search and rescue and policing. It will initially employ approximately 30 highly skilled staff including 13 aircrew instructors, all of which have recent military operational flying experience, and 12 aircraft technicians.

The announcement follows millions of pounds of investment from airport owner’s Cornwall Council; SWRDA and European programmes to turn a former Ministry of Defence airfield into a thriving commercial airport. It was marked with a ribbon cutting event today (March 31) which was attended by key partners in the project.

John Ponsonby, AgustaWestland’s SVP of Training, which has training programmes in Britain, Italy and North America, said: “We are already seeing strong interest from military and public service helicopter operators around the world for the operational flying training services this new facility can deliver.

“The AgustaWestland Operational Flying Training Centre, here at Newquay Cornwall Airport, is not only bringing new highly skilled jobs to Cornwall but it will also benefit local businesses and become known around the world as a centre of training excellence.”

Al Titterington, MD of Newquay Cornwall Airport, added: “This is fantastic news and the first major step in the development of the airfield infrastructure using the extensive assets which are available to us. AgustaWestland is a key player in the aerospace sector and the first, of what we hope will be a number of significant aviation related businesses, to start operations at the airport since the transition from the former RAF St Mawgan.”

AgustaWestland was advised on its grant application by David Armstrong, grants specialist at Francis Clark. He said: “We are delighted that having advised AgustaWestland on its grant application this global training facility is now operational. The RDA offer of grant support was instrumental in ensuring that Newquay Cornwall Airport was chosen for a project which will have substantial economic benefits for the Cornish economy.” 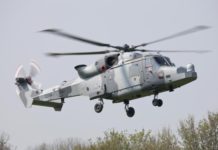