Prime Minister Boris Johnson has pledged to replace EU funding in Cornwall and the Isles of Scilly like-for-like with a dedicated fund that could be worth up to £600 million over the next decade.

The Prime Minister made his comments during an interview with BBC Spotlight broadcast last night (Sept 26).

When asked if he was saying categorically that the Government would replace EU funding in Cornwall and the Isles of Scilly like-for-like after Brexit, Johnson said: “Yes. It’s going to be the same quantum. We’re going to make sure the Prosperity Fund matches.”

Pressed on whether this funding would be competitive with other UK regions or ring-fenced for Cornwall, the PM added: “There is going to be a discrete fund for Cornwall, the Prosperity Fund, which will match the existing funding. We’re determined to do that.”

The Government’s long-awaited Shared Prosperity Fund (SPF) is designed to replace EU funding after Brexit, but details have been scarce.

The Prime Minister’s pledge to use part of the SPF to create a bespoke fund for Cornwall and Scilly could be worth around £60 million a year for the next seven to ten years. This is what the area could have expected from the EU to support its economy if the UK remained in the European Union.

Glenn Caplin, chief executive of the Cornwall & Isles of Scilly Local Enterprise Partnership, said: “We have long argued that Cornwall and Scilly should be left no worse off after Brexit and we welcome the Prime Minister’s personal commitment to create a discrete fund to replace our EU programme.

“It’s vital that the special economic circumstances of Cornwall & Scilly continue to be recognised and we look forward to working with our partners, Government and our MPs on shaping our new regional investment programme.” 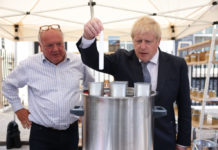