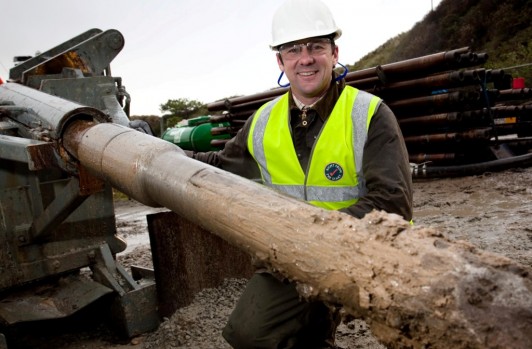 Work on the pioneering Wave Hub marine energy project begins in earnest this week (November 30) when engineers start to drill through sand dunes at Hayle in Cornwall.

Wave Hub will create the world’s largest test site for wave energy technology by building a grid-connected socket on the seabed, 10 miles off the coast, to which wave power devices can be connected and their performance evaluated.

The £42 million project has been developed by the South West RDA (Regional Development Agency) and is a cornerstone of its strategy to develop a world class marine energy industry in South West England.

A two-week operation is now underway to drill a 200-metre duct through sand dunes at Hayle where Wave Hub’s subsea-cable will come ashore. The cable will be threaded through the duct and connected to a new electricity sub-station that will be built next year, allowing Wave Hub to be connected to the National Grid.

Guy Lavender, Wave Hub’s recently appointed general manager who takes up his post in January, said: “Our contractors have spent the last two weeks setting up on site and are now ready to start. This is a crucial part of our shoreside works and means we’ll be ready to receive the cable connecting Wave Hub to the shore when it is laid next summer.

“We want south west England to be a world leader in the development of marine renewables, an industry which could be worth £2 billion a year to the UK by 2050. With world leaders meeting in Copenhagen next week to discuss climate change, Wave Hub is a tangible example of a project that could have a global impact on reducing carbon emissions and our dependence on fossil fuels.”