The rapidly expanding market for garden offices and lifestyle businesses in the UK has seen one Cornish company launch a new range of timber framed garden buildings, which it believes could have a major impact in the industry in the coming years.

Tor Garden Buildings has been launched by Sean Parker to provide a range of sustainable timber frame buildings built to the same standards as those required for house building, and suitable for everything from an urban micro office to larger office spaces accommodating three or four people, right through to one and two bedroom lodges for use on holiday parks, or for garden guest rooms.

In addition to high quality build specifications, the new range of Tor Garden Buildings have been designed to be as sustainable and eco friendly as possible, benefiting from features such as moss sedum roof, Cornish manufactured high quality timber windows and doors and timber cladding sourced from within the county and which is FSC approved.

According to Parker, who runs Oghma Project Services, a successful building project management company based in south east Cornwall, more people are choosing to work from home and establish home-based businesses, and the garden seen increasingly as an extension of the home – the time is right to create an alternative to traditional garden rooms.

He said: “It is estimated that there are over 3 million people in the UK working from home, with this figure rising annually.

“Given the choice, the vast majority would prefer to work in a separate and purpose built space rather than work from within a room in their house which is likely to be either unsuitable or where there are just too many distractions for them to be able to concentrate on work.

“We are delighted with the results and the feedback we have received so far has been extremely positive.” 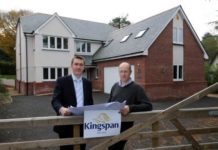