A virtual food festival was held on Easter Monday and proved an instant success.

The Virtual Food Festival was the brainchild of Ross Geach of Padstow Kitchen Gardens who struck upon the idea in the wake of all the food festival cancellations, to bring the festival atmosphere into peoples’ homes, while at the same time showcasing local suppliers.

Jack Stein said: “When Ross came to me and suggested this concept it just made so much sense. It’s a simple idea – whilst our restaurants are closed and we’re not able to buy from our brilliant suppliers, we help to showcase their great produce so customers can order directly from them.”

Geach also approached local web company, Solve Web Media, to set up a website, which director Lawrence Harmer was able to do in double quick time. Within 24 hours of going live, the site had received more than 3000 hits.

“It was another example of how in these crazy times, an idea can be turned in to reality quickly to help support the community,” he said. “We can make small changes or create entire systems quickly to make these dreams come true.” 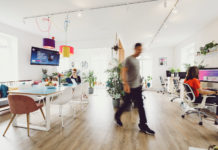