The Corserv Group has appointed Pete Andrew as its new, permanent chairperson.

Andrew, who is deputy chairman of the Home Builders Federation, has a wealth of industry experience and an in-depth understanding of the issues affecting house and infrastructure developers.

He started life as a trainee quantity surveyor and during a career spanning 40 years, worked his way up to become the UK land and planning director and a board member at Taylor Wimpey UK. He was also one of the four industry experts who helped the Government draft the National Planning Policy Framework.

He was awarded an MBE in the 2018 New Year Honours list for ‘services to construction’ in recognition for this work.

Corserv Group MD, Cath Robinson, said: “The depth, breadth and relevance of Pete’s experience to the Corserv Group’s work makes him an ideal candidate for the role of chairperson.

“An established board-level operator, Pete has been involved in corporate governance, risk assessment and investment committee work and has helped a number of firms grow and develop. He takes over from Elaine Holt who retires from the role of interim chairperson, with my and the board’s thanks. Elaine will remain on the Corserv board as a non-executive director.” 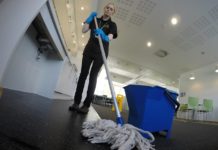 Cormac cleans up with contract win