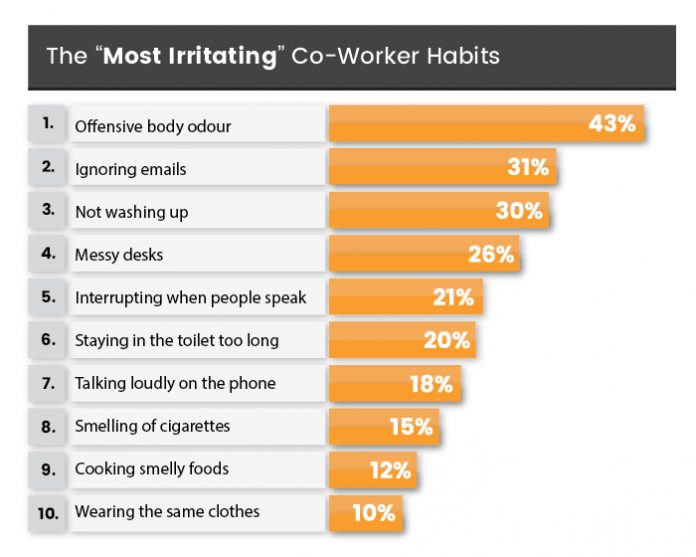 A new workplace survey has listed the “most irritating’ habits among co-workers.

Vapourcore.com conducted two surveys. First, 1,002 working Brits were surveyed and asked to list the “most irritating” habits they have noted in the workplace. Then, once a list was compiled, another survey was conducted to identify which ten habits were the most unbearable.

Vapourcore found the most featured response was “offensive body odour” with 43% of Brits agreeing poor personal hygiene was highly offensive in the workplace. The next most irritating habit was “ignoring emails” (31%), followed by “not washing up” – at 30%.

Unsurprisingly, there was a difference in response between the sexes. Indeed, both men and women were highly irritated by offensive body odour but communicative difficulties annoyed ladies the most, with ignoring emails and interrupting when people speak frustratingly put forward by female respondents. It was also the fairer sex who picked up on their colleagues wearing the same clothes more often than their male counterparts.

Alternatively, men were far more repulsed by mess – with not washing up and messy desks presented as maddening. Male respondents were also more likely to pick up on overbearing smells, with cigarette smoke and smelly foods making them feel uncomfortable in their workplace environment.