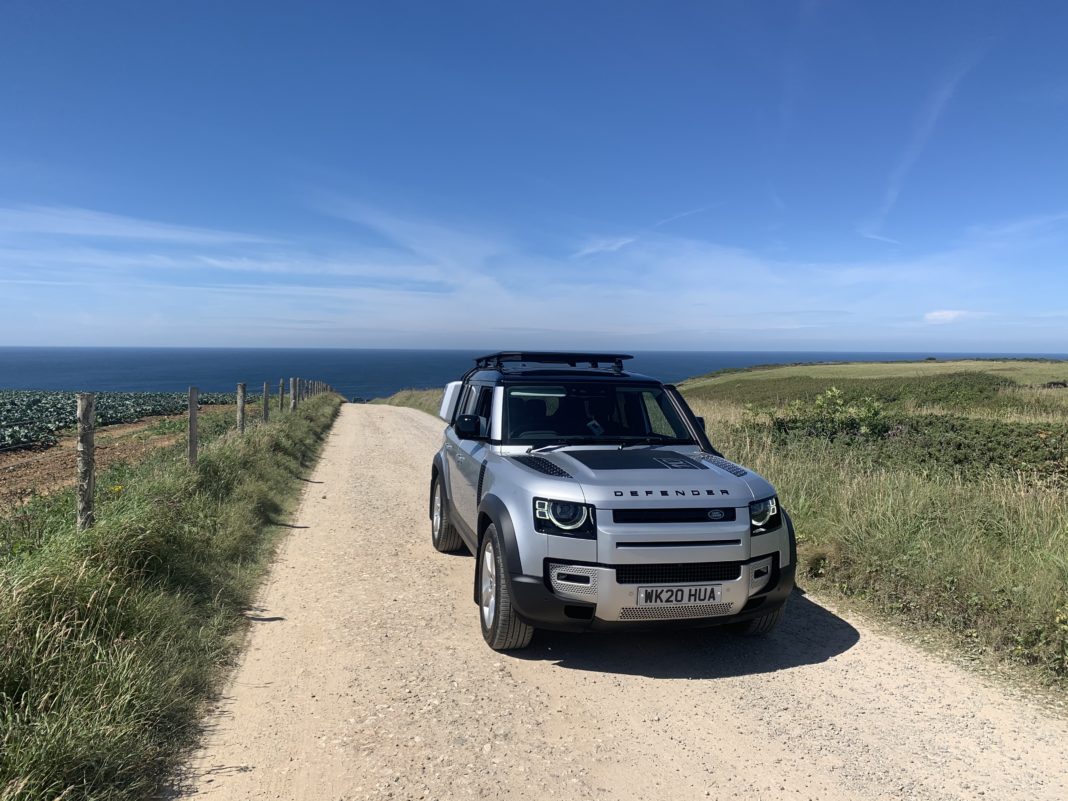 This month, courtesy of Carrs Jaguar Land Rover, Morveth Ward takes on what must be one the most recognisable vehicles on the planet, the Land Rover Defender

Reviewing the Defender is something I’ve been very much looking forward to. It was one of the most highly anticipated vehicles of this century and it certainly was for me, especially being an owner of an ‘old’ Defender, which coincidentally came from Carrs (Riders as it was then) new.

Without being too smart about it, the new Defender was what I was expecting. I was confident that Land Rover would produce a great vehicle here, with there being so much at stake. From the first Series One in 1948 to the last of the old-style Defender’s in January 2016, this has been the model that has defined the brand, the one people recognise over and above any other model. If Land Rover got the new Defender wrong, it would bring a blip in the iconic reign that could have proved disastrous for not only the Defender, but the entire range.

It was the model that gave Land Rover the reputation for producing hardy all-terrain vehicles – this and its iconic shape and character is why people love it.

However, the replacement didn’t mean making something as utilitarian as the old one. To me I was under no illusion that true utilitarian bias, which dictated a basic and rugged feel that bounces you along country lanes with the refinement and luxury of a garden
shed, was now a thing of the past – things have moved on and there is no need for that
level of compromise anymore. However, the bi-product of the nature of the predecessor
is that it achieved ‘character’ that made it unique. Recreating this was always going to
be one of the toughest challenges for Land Rover – and doing so whilst leading the way
with a more modern vehicle that understands the present market demands – the question
then, is whether Land Rover has succeeded in this?l I think so.

The design is of course subjective, but I think it has unmistakable reminders of its heritage in the aesthetic: the true boxy-ness has been blunted but is still present, but features such
as the side-hinged tailgate, lights, alpine roof windows etc all hark back to the original. The
interior was always a laughing point on the old Landy, being an afterthought, thrown together and very basic (but it did serve its purpose, just). The new Defender is incomparable in this department, being luxury, spacious and loaded with tech – there are just a couple stylised hints of the old, including exposed bolt heads in places and the long bar across the top of the dash. It does have some of the practicalities, too, with rubber matting throughout, so you can still hose it out. Land Rover has tried to strike a balance between modern and original and whilst the bias is towards the former, I think they’ve achieved this. It looks striking and individual. I was surprised at how many people
were turning their heads to have a look and questioning me about it. 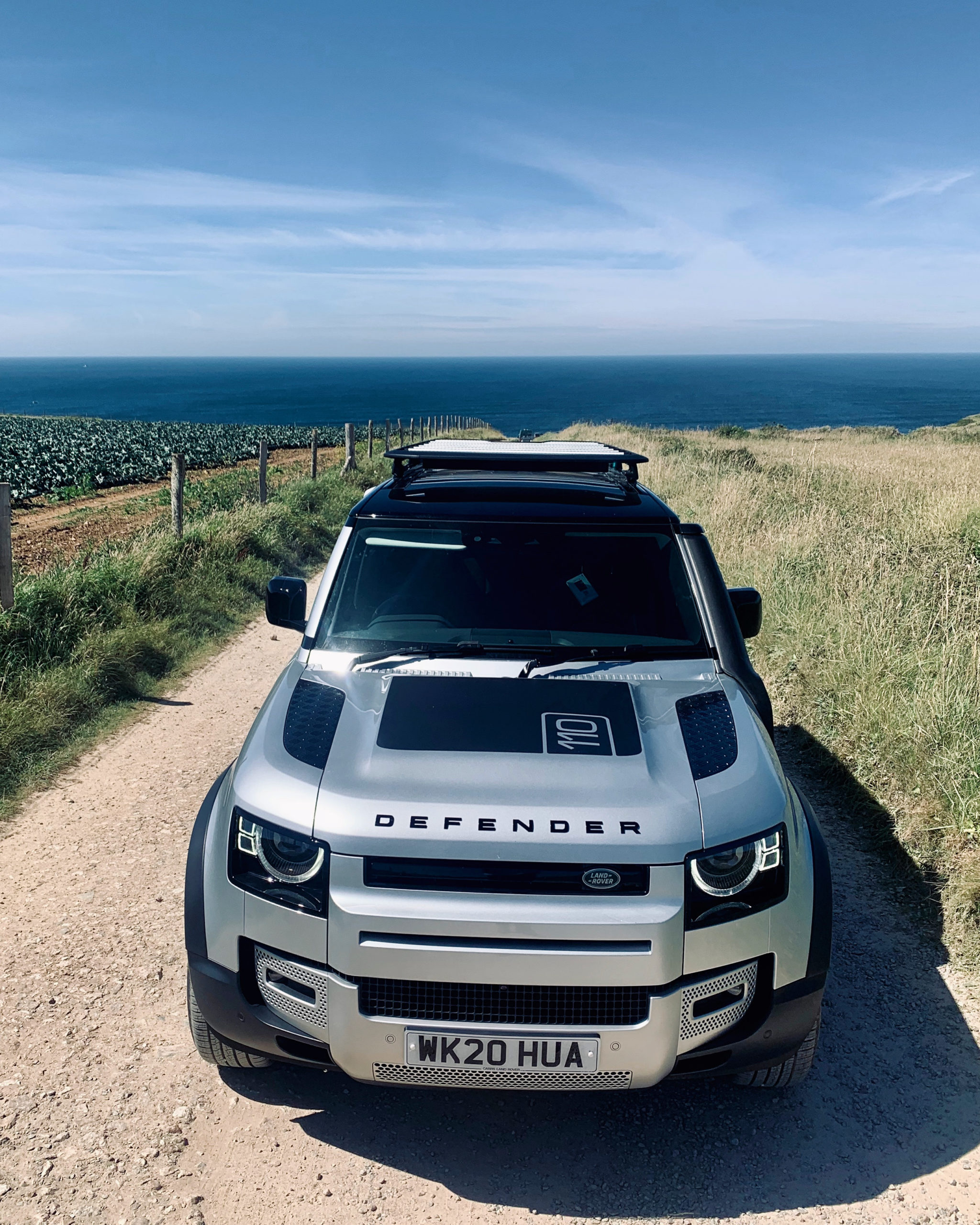 The next challenge was making sure that it lives up to the do anything, go anywhere reputation. Afterall this was what the original Land Rover was built for – a versatile all-terrain vehicle. Fundamentally it’s a very different machine, but with the same brief in mind. Whilst the old Defender has a mechano-like set-up with a ladder chassis and separate body, the new Defender has an aluminium monocoque arrangement. Crucially, it is truly capable off road and comes with features such as mechanical locking diffs as well as an abundance of electronic aids, making for exceptional grip. Then there is the ground clearance which can be raised (on air suspension models) to 11.5 inches and has the wheels on the corners, meaning you can take very steep ascents/ descents. Oh, and it’s good at wading through water, too.

The on-board technology further aids with its off-road ability, with settings to optimise the vehicle according to the terrain and underside cameras so you can see what is beneath you. So, for off-road capability it is a big tick! And here’s the amazing thing, you now have the best of both worlds, as it drives incredibly well on the road (something that couldn’t be said before): smooth, refined and solid feeling, with a great choice of engines (and a hybrid on its way). I think it drives very similar to a Discovery.

The only thing that has been lost, which is quite important to some, is that the new Defender is no longer the easy-to-work on, fix it yourself puzzle of pieces that it used to be. The reason there are such a high number of Land Rover series / Defenders still on the road is because they are cheap and easy to fix. If you knock a wing mirror off in the woods,
you buy a new one for £20 and fit it yourself. Even when your Landy gets to 30 years old
and the chassis has rusted through – you buy another chassis and replace it. This is why
the old Land Rover’s will still outlive the new ones. However, the old Defender will continue
to serve that purpose, whilst the new one is perfect for the huge market of adventurers
and outdoors loving people, that want something fun, loveable and uncompromising.

In summary, whilst wildly different from the predecessor, the essence of the Defender is
still well and truly alive in a vehicle that is now highly capable off road, but also equally on
road. It’s still more than just a vehicle and will no doubt remain an institution.

Prices start from around £45k, though the one as tested here is a First Edition 110 with many extras and costs around £65k. Extras on the model tested, include the explorer pack,
which is the roof rack, snorkel and side panier, amongst other things. The 110 (long wheel
base) is out now and the 90 (short wheel base) is available to order. Carrs, Scorrier have
demonstrators in, so you know where to go if you think the Defender is for you. Afterall they are the perfect versatile vehicle for Cornwall and look epic! 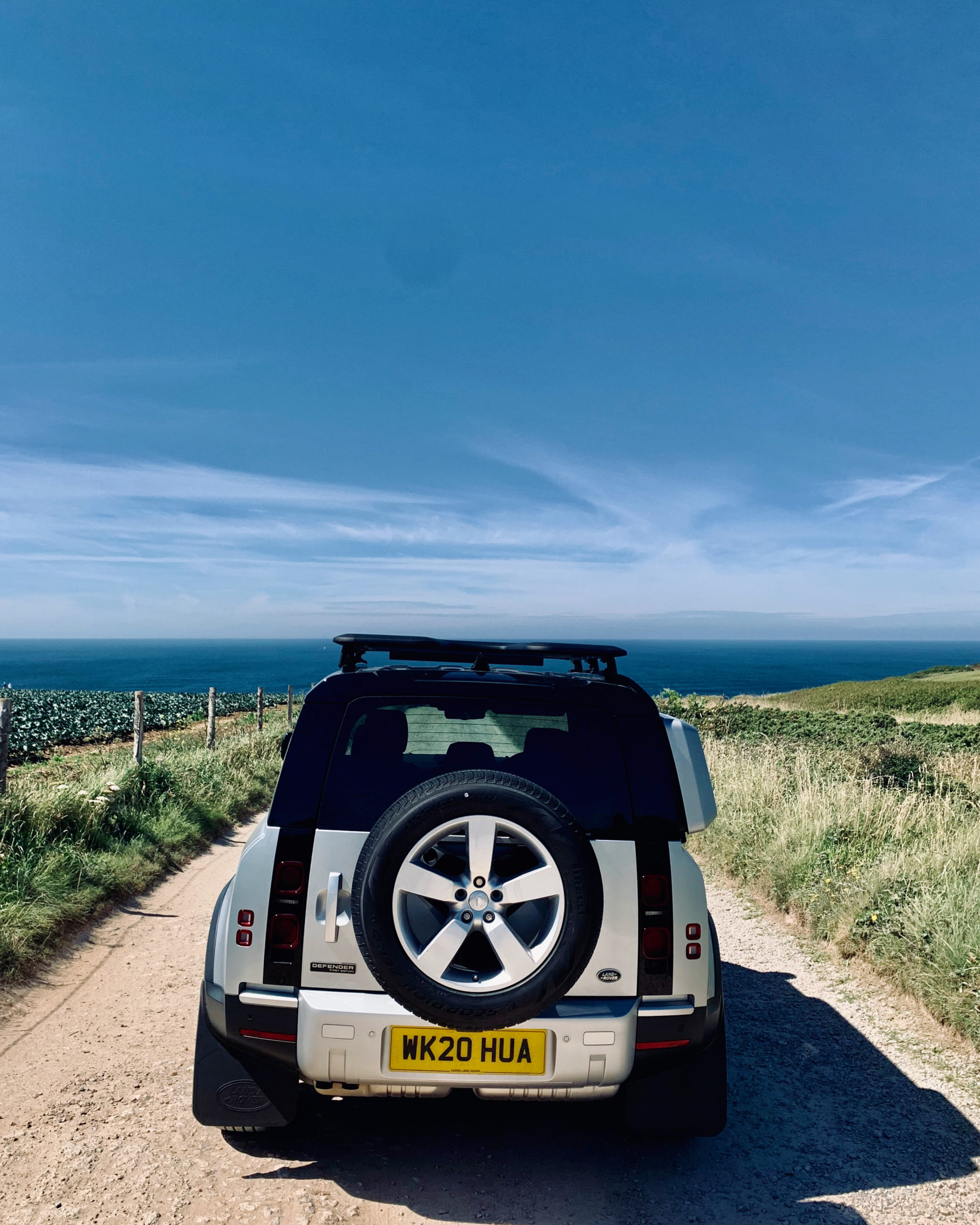