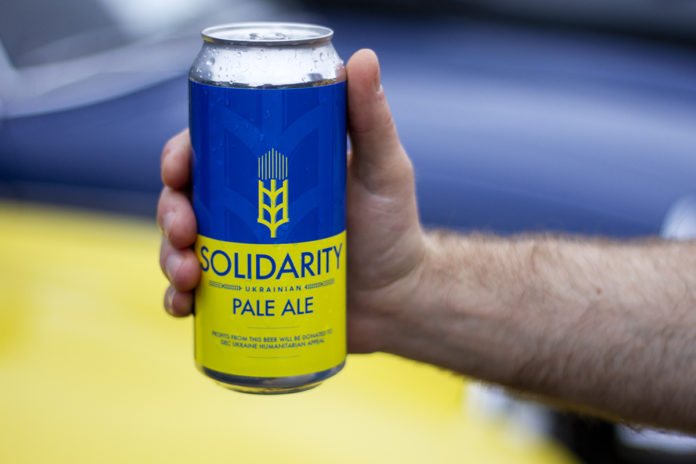 A Cornish craft brewery has teamed up with a Ukrainian counterpart to produce a new brew to raise money for the DEC Ukraine Humanitarian Appeal.

Jonny Cooper, founder and chief brewer at St Agnes-based Pipeline Brewing Co, has pledged his support for the people of Ukraine by working with PZDK and Zen Breweries in Ukraine.

“He was calling for support of Ukraine by spreading a message of alliance throughout the international brewing community, during the awful events happening throughout their country. Beer has always brought people together and that is exactly what this beer will do – it will give people the chance to show their support for Ukraine and toast to a better future.”

Many Cornish businesses have been showing their support for Ukraine in recent weeks and months through profit donation and sponsored events. Pipeline Brewing Co received a plea for help from the Ukrainian brewing community.

Godinia said: “I am a volunteer in Ukraine’s territorial defence, carrying out my duty for the people of Ukraine. I help to sort and collect the help needed by refugees and soldiers on the front line. It’s not fun at all here right now, but we hold on.

“Together we are doing everything possible to win the war against Russia. We are asking other breweries to support our people. The beer industry of independent breweries is on the verge of extinction. Everything we have created and developed over the years has been ruined by this terrible war. We really need your support. I was very touched when Jonny agreed to work together on this collaboration. I feel that with his support – we are brothers in beer.”

The outcome for Pipeline Brewing Co was a pale ale named Solidarity, brewed in collaboration with PZDK Brewery. The label is designed using the colours of the Ukrainian flag and the beer was brewed in a small batch in St Agnes.

“We’ve used tasting notes of Simcoe, Citra and El Dorado hops, making for a vibrant, juicy beer,” said Cooper. “The profits from Solidarity will go directly to DEC Ukraine Humanitarian Appeal, a charity that is providing food, water, shelter and medical assistance for the affected people of Ukraine and neighbouring countries.”

To purchase Solidarity and support DEC you can visit Pipeline Brewing Co at Great Western Railway Yard, St. Agnes, on Fridays from 4pm or direct message them via their social media channels.