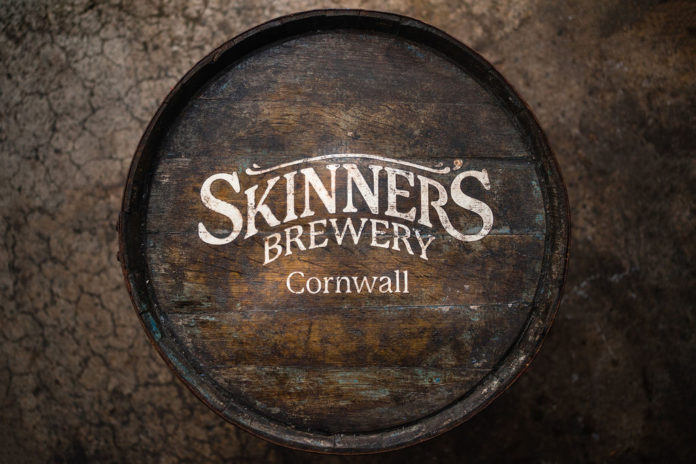 Betty Stogs has been a flagship Skinner’s beer since 1997. The new look unveiled this week harks back to the most memorable moment for much-loved ‘Betty’, reworking the image created to celebrate the beer being crowned ‘Champion Best Bitter of Great Britain’ at the Great British Beer Festival at Earl’s Court in 2008.

Shortly after that prestigious win, artist Nick Beringer worked closely with brewery founder Steve Skinner, creating an image depicting Betty returning victorious from London; it is this image which has been reimagined to adorn bars in Cornwall and beyond today.

Skinner explained the nostalgic choice for the rebrand, saying: “These days I think a lot of beer branding looks generic, and Betty is anything but generic! Skinner’s is known for its quirky nature and warm-hearted approach; Betty is the epitome of that. We are proud of the beer and a brand which celebrates difference by being stubbornly non-generic!”

With the revival of the old artwork, the brewery, owned by Steve and his wife Elaine, has mounted a campaign to ‘Bring Back Betty’.

“This artwork has always been our favourite, and it was loved by our loyal customers,” said Elaine Skinner. “It’s a celebration of everything Skinner’s is known for, and what Betty (masterfully played by Fred Thomas) stands for. We aren’t a homogenous brand, and we aren’t afraid to show what we believe in. After a tough few years as a result of Covid-19, and overcoming many obstacles to bring the brewery back under our exclusive ownership, we felt it was the right time to Bring Back Betty.”

When Skinner’s brewed the first batch of Betty Stogs in 1997, Steve Skinner created the brand based on a character from Cornish folklore.

Betty was bought to life – played by the fabulous Fred – and over time people in Cornwall came to associate Betty Stogs with more than just beer, as she became a mascot for Cornwall’s incredible community spirit.

For many years Betty has appeared – larger than life and forever shaking that donations bucket – at countless charity events, raising hundreds of thousands of pounds for local good causes including the RNLI and Children’s Hospice South West.

You can enjoy a new-look pint of Betty Stogs at brewery tap, The Old Ale House on Quay Street in Truro, and the newly reopened Tap Yard Bar and Café at the brewery itself in Newham.