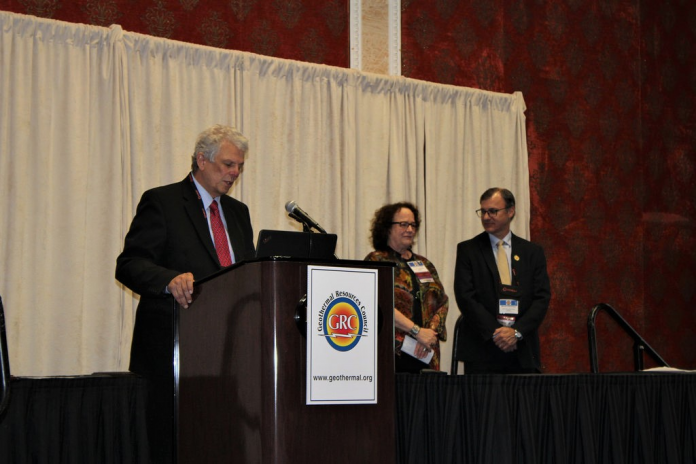 One of the pioneers behind the development of geothermal energy has received an international award.

Truro resident Roy Baria, who was a director of the Hot Rocks project in Penryn during the 1980s and then chief scientist at the first major European project in France, received a coveted Special Achievement Award at the annual meeting of the Geothermal Resources Council (GRC) in Nevada, USA.

Baria, who is now technical director of EGS Energy, the company working on development of a deep geothermal system at the Eden Project, said: “I am delighted that deep geothermal has now returned to Cornwall as a viable energy technology. It’s gratifying to see groundbreaking projects underway at United Downs and in development at the Eden Project.”

Dr Andrew Jupe, director of altcom Limited in Penzance, who also attended the award ceremony in Reno, added: “It has been great to see Roy receive this award. He is an innovator with the passion and energy to take the technology through from R&D into commercial reality.

“He has also left a great skills legacy around the world. Our company altcom is one of numerous small hi-tech businesses in the region that emerged from the development of geothermal research and technology in Cornwall.”

Baria joined the Camborne School of Mines (CSM) Hot Rocks project in 1980 on secondment from the British Geological Survey (BGS) and served initially as head of geophysics and then deputy project director. In 1990, at the request of the European Commission and UK government, he was seconded to the European Project in Soultz-sous-Forêts (near Strasbourg). There he served as one of three project directors, representing the UK alongside France and Germany.

The groundbreaking research undertaken at Soultz led to the first fully commercial deep geothermal developments in the world. Baria played a pivotal role commercialising the technology and these projects provided the catalyst for the return of geothermal to Cornwall.