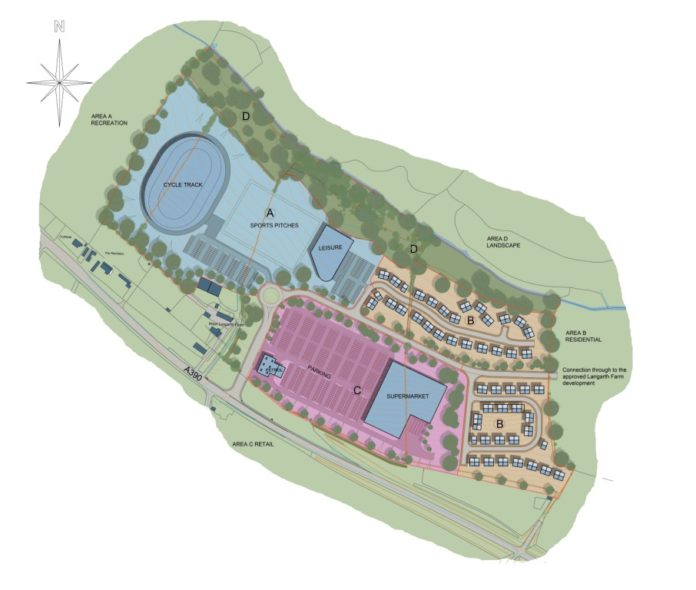 Inox Group, the company which recently secured planning permission for 1,500 homes and commercial uses at Langarth Farm in Truro, has revealed new proposals to raise the necessary private sector funding to deliver the Stadium for Cornwall project.

Inox is seeking commercial developers and end users to put together an enabling development scheme on nearby land that would help fund the stadium.

The company said it had secured an option on an additional 35 acres of land adjoining Langarth Farm and had instructed commercial property agents to market the site to potential end users, including supermarket operators. 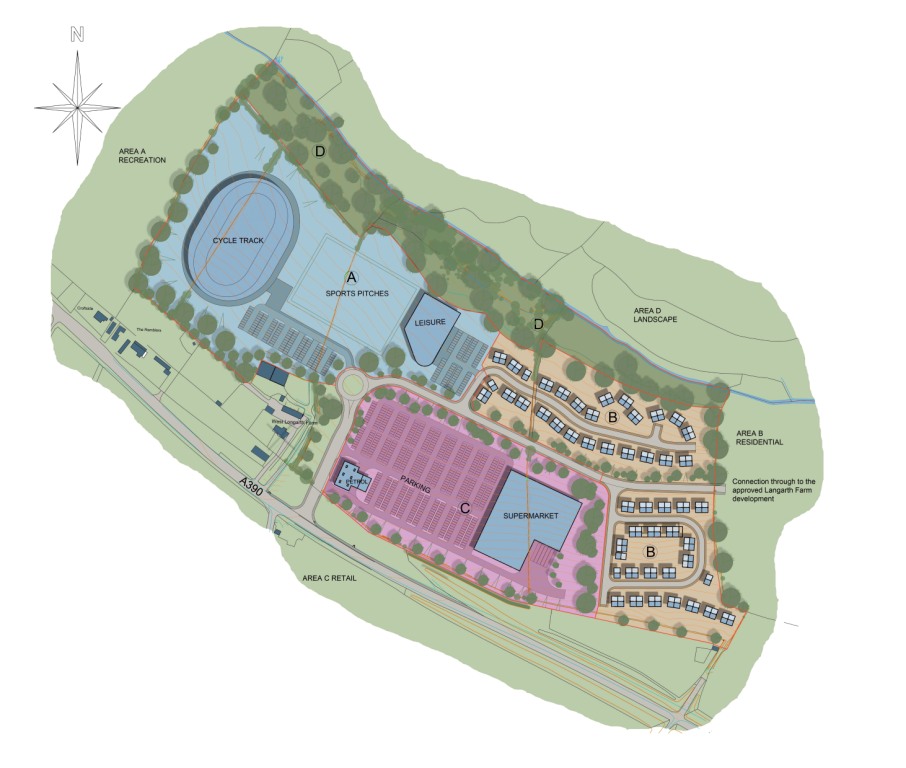 Subject to planning, the company said it aimed to create a commercial scheme that could bankroll not just the construction of the multi million pound stadium but provide long-term revenue streams to help meet running costs.

This could include a supermarket, petrol station, cycle track, sports pitches, leisure facilities and some housing, with net proceeds being ploughed into the stadium project.

Inox MD, Rob Saltmarsh, said: “In 2010 Inox committed to assisting with the delivery of the Stadium for Cornwall by securing planning permission and providing the land for the stadium – this we have now done. Given the continued pressure on the public purse we have now further committed to try and source private funding for what we believe is an incredible project that would be a major asset for the whole of Cornwall.

“If the stadium is ever going to happen, then some commercial reality needs to be injected into this process.”

“Over the Christmas period we secured an option on 35 acres of land adjoining Langarth Farm, with the intention of seeking planning permission for enabling development on the site to help fund the stadium project.

“Other areas of funding have been exhausted over the past few years and although I am sure there will be both critics and supporters of this approach, the blunt reality is that without public funding we have no other option but to pursue commercial funding avenues that we are advised have the potential to generate the millions required to make this project happen.

“If the stadium is ever going to happen, then some commercial reality needs to be injected into this process.

Saltmarsh said the funding options would be a lot clearer in the coming weeks and if positive Inox would look to hold discussions with Cornwall Council and potential stadium tenants the Cornish Pirates RFC, Truro City FC and Truro and Penwith College, with the aim of submitting an enabling development planning application in the spring of 2014.

He added: “What is becoming clear from our discussions with Jones Lang LaSalle is that the very high values created by food retail are likely to be required to enable a private sector led community stadium to come forward. Similar projects have been recently approved in York and Leigh, both of which involve retail enabling development.

“It is Inox’s intention that the net proceeds of monies gained from any enabling development consent will go directly towards the stadium project delivery, and we would sign a legal undertaking to this effect.

“Grant funding is also being explored with Cornwall Sports Partnership who have contacted various sporting governing bodies and Inox are also looking at other central government grants that may further assist with the project’s delivery and also help create a wider ‘sporting hub’. We are also keen to hear from local sporting clubs and societies who may wish to become involved in this new phase of the project.”

Peter Marks, chairman of the Stadium 4 Cornwall Group, said he welcomed the Inox initiative: “The Stadium for Cornwall Group has been working hard with developers Inox over the past few months and we are fully supportive of this private sector funding approach.

“The previous full Council voted against the use of public monies to help fund the community stadium and it was made clear that the private sector needed to find a solution. This latest news shows the stadium project is alive and kicking and a potential private funding solution is possible, but for the enabling development to happen, the support of Cornwall Council will be required.

“It remains the view of S4C and thousands of people in Cornwall that a community stadium must be a top priority for Cornwall.”

Dicky Evans, Cornish Pirates chairman, added: “Despite the delays and hurdles in the way over the last few years, the Cornish Pirates are pleased to confirm that they remain fully committed to supporting the proposed Stadium for Cornwall at Langarth, Truro.

“Without such a facility, the Pirates are unable to move forward in their quest to improve sporting standards in Cornwall and especially on the rugby field.

“It is galling to see local players continue to move out of Cornwall to improve their prospects of top class rugby and this talent drain can only be halted by the provision of such a facility.

“We have worked with INOX for several years and have reached a point in planning and development whereby the funding of this facility is the only real roadblock left, and we are pleased to see the ongoing efforts being made to attract private sector investment to ensure that the project can proceed.

“We look forward to sharing this facility with organisations such as Truro & Penwith College as well Truro City Football Club.”

Charles Kislingbury, lead director at Jones Lang LaSalle in Exeter, said he was confident of very strong retailer and commercial developer interest and said: “Jones Lang LaSalle is delighted to be involved with this exciting project and the potential that it brings to raise the funding to realise the Stadium for Cornwall.”