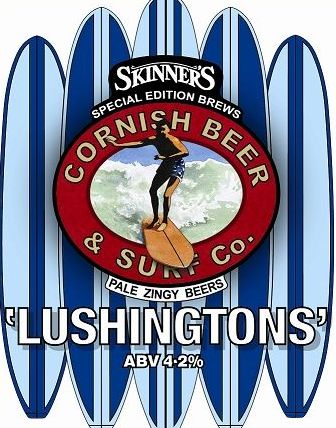 Skinner’s Brewery is today launching a new, special edition ale for the summer, named after a popular Cornish surfing break, featuring hops that have never before been used in the UK.

‘Lushingtons’ will be available during May, June, July and August in pubs throughout Cornwall and Devon, as well as nationally through wholesalers and pub companies.

It is a zingy, straw coloured, fruity, pale ale with an ABV of 4.2% using only Cornish barley alongside three unusual hops sourced from the USA – including Belma which is a new hop being used for the first time in the UK.

Lushingtons is named after a popular surf break in Porthtowan and is being launched by international surfing champion Ben “Skindog” Skinner.

Chief executive of Skinners Brewery, Steve Skinner, said: “We are very excited to be the first brewery in the UK to use the hop Belma, having sourced it in the USA, alongside our Cornish barley.

“I am very proud of Ben’s surfing achievements and naming one of our ales after a popular Cornish break is a nod to the outstanding surfing talent that we have in the county.”

Lushingtons will be launched at the beer and music festival at the Old Ale House from April 26 – 28 and at the Victory Inn at Towan Cross which is also holding an event to celebrate the launch of the ale with Cornwall CAMRA members on the same weekend.