According to its co-founder, loyalty and continuity have been key to the ongoing success of one of the south west’s best known firms.

Geoffrey Holborow was speaking at a special reception to celebrate the 50th anniversary of Stratton & Holborow, the firm that he launched with his late partner Richard Stratton in 1960.

As chartered surveyors specialising in land agency, building and design and commercial property, the company has 45 staff operating from offices in Truro, Exeter and St Mellion.

The golden celebration took place in a marquee that had been erected for the occasion in the car park at Lemon Villas, Stratton & Holborow’s Truro headquarters.

Holborow said: “Loyalty and continuity have always been the bedrock of Stratton & Holborow’s success and the current partners are just as keen as we were to ensure that remains the case.” 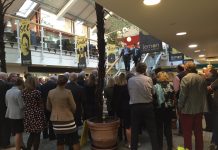