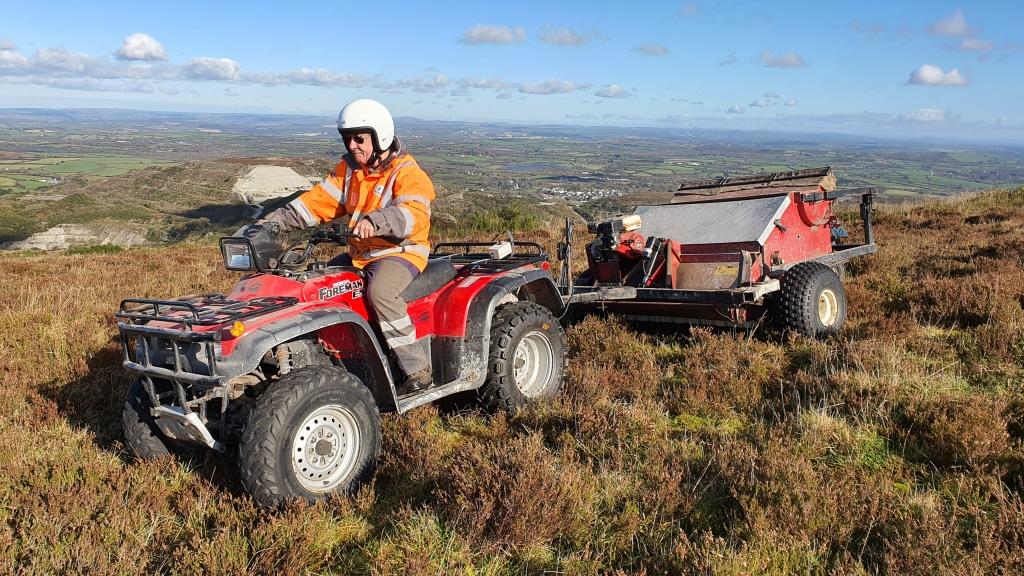 The Eden Project and Imerys are working together to create areas of vitally important heathland beside the new A30 St Austell Link Road.

Heathland is said to be a globally rare habitat, rarer than rainforest, and the new stretches along the road corridor will provide stepping stones for wildlife between existing areas of heath at Hensbarrow Downs to the south and Goss Moor to the north.

Despite lockdown, work is continuing to prepare the 3.9-mile single carriageway that will connect the old A30 near Victoria to the north and the A391 at Stenalees roundabout to the south.

The vital strategic link aims to bring economic opportunities to the area by upgrading links to St Austell and the A30.

A large part of the ethos of the road is for it to have a positive impact on nature and surrounding communities by providing opportunities for recreation and homes for wildlife.

The Eden Project has engaged with Cornwall Council from inception to ensure that it becomes the greenest gateway possible to the Eden site and St Austell town.

Cornwall Council has worked extensively with Eden to develop ambitious plans for the landscaping of the road, which will create over 18 hectares of new wildflower, woodland, and heathland habitat.

Eden’s National Wildflower Centre has partnered with Imerys on the heathland creation project.

The work will involve harvesting heather from donor sites on Imerys owned heathland using a piece of machinery called a ‘brush harvester.’

The harvester hoovers up heather ‘litter’, laden with seed, which is then spread on the newly prepared ground along the road corridor, resulting in new heather and other heathland plant species.

This autumn sees the start of the heathland creation work with Imerys and Eden trialling techniques for heather harvest, ahead of work beginning in earnest on the road in 2021.

Employees from Imerys have put the brush harvester through its paces on Hensbarrow Downs, and this will help the National Wildflower Centre at Eden to have a better estimate of seed yield and the volume of heather litter available.

The careful preparation will help to ensure that the tricky process of creating new heathland habitat is a success.

Dan James, Eden’s development director, is delighted with progress so far. He said: “The National Wildflower Centre at Eden is very excited to be leading on this vital piece of work.

“Nature needs all the help it can get, and this new habitat will help to link important but isolated islands of heath across the Clay Country. It’ll also be incredibly beautiful – a fitting gateway to the Eden Project and St Austell.”

Guy Mayhew, deputy non-operational areas manager at Imerys, added: “Having carried out extensive restoration of our own in recent years, Imerys are pleased to be supporting Eden in this project. In 2017, Imerys won the prestigious Natural England Award for Landscape and Biodiversity. The project which led to this award involved the creation of 785 hectares of lowland heathland on Imerys sites extending over 26 square miles in mid Cornwall. It’s great that we can use our knowledge and experience to ensure the heathland creation work for the new road is successful.”

Councillor Geoff Brown, Cornwall Council cabinet portfolio holder for transport, said: “We want this to be one of the greenest roads ever built with significant landscaping which has been specifically designed to support wildlife habitats and insects.

“The involvement of the National Wildlife Centre is key to achieving this aim and using heather from Imerys’ land will ensure the corridor can match the local landscape and support local biodiversity. If this approach is successful it could lead the way in building greener roads for the future.”