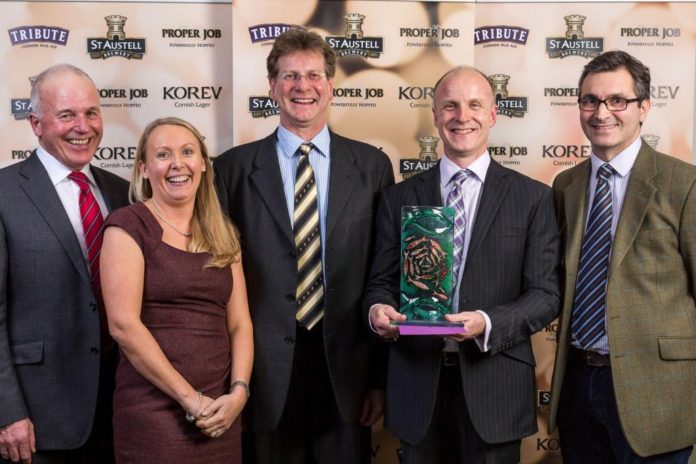 The Pandora Inn and The Pedn Olva Hotel in St Ives were among the winners at the annual Tribute Estate Awards.

The awards recognise the best performing owned and managed pubs and hotels in the 170-strong St Austell Brewery estate.

A total of 19 awards were presented at the event held at the Great Western in Newquay, celebrating excellence in categories like food and drink, accommodation, customer service, training and marketing.

The evening culminated with the awards for managers and tenants of the year, plus the introduction of a new director’s award.

Joint winners of New Tenants of the Year were awarded to hosts John Marquis and Melissa Holstegge of The Sharksfin, Mevegissey, and Pete and Elaine Delaney from the Lugger Inn, Polruan.

The Director’s Award, presented by MD James Staughton, was awarded to Steve Bellman and John Milan who operate a select portfolio of properties under the ‘Inns of Cornwall & Devon’ name, which include the Pandora Inn at Restronguet.

Proving its ongoing commitment to the training and development of staff, The Victoria Inn, Threemilestone won the Training Pub of the Year award for the second year running. Customer Service Pub of the Year went to The Lifeboat Inn, St Ives, which was received by delighted host Kellie-Jane McKeown, and Community Pub of the Year was won by The Logan Rock Inn, St Levan.

Linda Prior from the Old Custom House, Padstow received the Food Pub of the Year (Managed) award and The Pandora Inn, Mylor won Wine House of the Year having excelled during 2014, winning the Best Wine Pub award at the Great British Pub Awards.