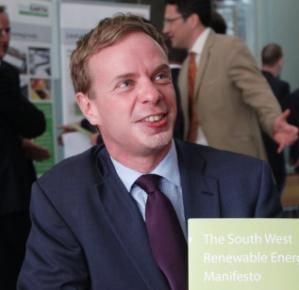 Twenty three MPs have proclaimed their support for the development of a “world-leading” renewable energy industry in the south west by signing up to the UK’s first regional renewable energy manifesto at Westminster.

Among those to put their names to the paper yesterday were Cornish MPs Andrew George, Sarah Newton and member for St Austell and Newquay, Stephen Gilbert, who hosted the launch. He said: “The South West Renewable Energy Manifesto sets out clearly the case for jobs and growth of renewables across the region and I was delighted to host their event today in Parliament.

“The renewables sector could deliver up to 34,000 jobs in the West Country alone and the scale of the economic opportunity in front of us should be grasped with both hands.”

The manifesto sets out eight specific commitments including the support of a consistent regulatory framework to incentivise long-term investment in renewables, and investment in the national and local grid, and to roll out new ‘smart’ technology.

Merlin Hyman, chief executive at not-for-profit sustainable energy specialist, Regen SW, said: “Today was a landmark occasion. Industry, MPs and Local Enterprise Partnerships have come together for the first time to make a strategic commitment to a building a world leading renewable energy sector in the south west.”

The July/August issue of Business Cornwall magazine will feature a closer look at the renewable energy industry in Cornwall. To get involved, email Nicci Dunning.