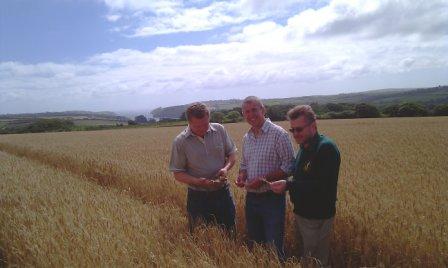 St Austell Brewery’s head brewer Roger Ryman is pictured inspecting this year’s crop of Cornish Maris Otter Barley, which is grown on a farm near Constantine.

The barley has been specially-commissioned by the brewery to be turned into its award-winning Tribute ale.

The barley will be malted by Chris Garret, from Waminster Maltings, before it is brewed to make the beer.

Ryman said: “It’s fantastic to think that next year this will all be Tribute! I’m looking forward to it already.

“Making beer doesn’t start in a brewery – it starts in a field. When people see a vineyard they automatically make the connection with wine, but it’s not the same with fields of barley.

“That field overlooking the Helford River is a field of Tribute being grown.”