Chef Ben Tunnicliffe hosted a patrons’ lunch at The Tolcarne Inn this week to celebrate a successful first operational year of the National Lobster Hatchery’s (NLH) satellite in Newlyn – an outpost of the Padstow-based marine conservation charity.

Tunnicliffe, who has recently become a patron of the charity himself, welcomed key supporters of the project from all over the country as they came for an in-depth insight into the facility at Newlyn Harbour, which has been operational since August 2017.

The Newlyn hatchery helps to enhance natural stocks and stabilise the lobster population, whilst contributing to the NLH’s extensive research and education programme; it is part of the organisation’s long-term strategy for supporting the fishery for generations to come.

Housed in two shipping containers, the Newlyn facility has already nurtured and released tens of thousands of juvenile lobsters into coastal waters, and it is proving to be an operational success.

Edwin Derriman MBE, founding chairman of NLH, said: “The Newlyn satellite Lobster Hatchery is a concept that the NLH has wanted to try for several years. With two excellent technicians running the facility – Chris Weston and Ruth Cacharron – the production of larvae and juveniles has been better than hoped for, and the Board of NLH may consider other satellite facilities as a result.”

NLH chairman elect, Rob Wing, added: “We are hugely grateful to Ben for his invaluable patronage. He is not only the worthy recipient of a Michelin Bib Gourmand for his culinary skill, but is also a passionate advocate of Cornish seafood. We thank him very much for his generosity in hosting this special event for our growing band of patrons who make an enormous difference to the scope of what the NLH can achieve.”

Tunnicliffe said: “I’m very honoured to be involved with the charity as a whole, and the Newlyn hatchery specifically. The work of the NLH is vital to ensure future sustainability of lobster stocks, which are an important part of the marine ecosystem.” 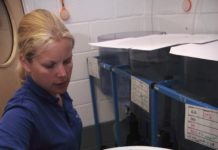 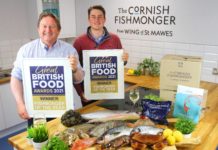 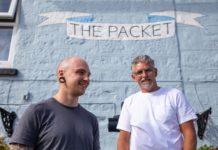