A Falmouth-based beer brand has entered a competition to identify the most innovative and exciting small and medium sized businesses in the UK and Ireland.

Jubel, set up by Tom Jordan and Jesse Wilson, is in the running for VOOM Pitch 2018, the UK & Ireland’s biggest pitching competition with a prize pot of £1 million.

Jubel is hoping to have the chance to pitch its ideas to Richard Branson at the VOOM Pitch Grand Final in London on May 23.

But before it can think of that, Jubel has to first get through online public voting and semi-final heats, to be held in Manchester, where businesses will pitch to senior business figures.

Jubel’s peach infused lager has been an instant hit since it was launched in May 2017 and is now sold in 300+ outlets across the region.

Jordan and Wilson recently launched their new product, an elderflower infused lager, at Porthleven Food Festival. The Jubel boys have put together a creative pitch video that is inspiring lots of votes thus far and has been viewed more than 30,000 times across social media.

Jordan said: “We’ve tried to stand out with our pitch video and do something a bit different and people seem to be enjoying it. We’ve had people messaging us from as far as the USA and Australia telling us they voted for us having seen the video. It’s an exciting competition to be part of and it’s really cool to see big business come together to support small startups.”

For more details on VOOM Pitch 2018 and to vote for Jubel, click here. Voting closes May 8. 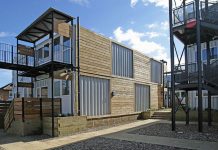