Bodmin Moor-based brewery Penpont will celebrate its seventh birthday next week with its popular annual Pie and Ale Night.

Penpont Brewery will mark the occasion on Friday, November 13 at the Rising Sun – the pub where it all began.

The Altarnun venue will host the event in honour of Penpont and its younger sister brewery, Firebrand Brewing Co, as owners Joe Thomson and Stephen Medlicott met at the pub.

Thomson said: “It’s hard to believe we’ve been brewing for seven years now. As a barman at the Rising Sun I always talked to regulars about the need for someone to start a local brewery. Stephen, who farmed just down the road, backed the idea and was willing to convert an old milking parlour.

“We got the equipment installed and Penpont Brewery brewed its first batches of St Nonna’s and Roughtor in late 2008. We’ve enjoyed steady growth since and continue to win multiple awards.” 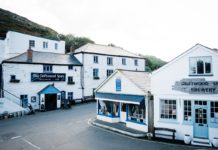