Sarah Hjalmarsson has been hired to assist Rhys Powell, who founded the firm with Eddie Lofthouse in 2011.

Hjalmarsson hails from Halmstad in Sweden and previously worked in the Krönleins Brewery in her home town after some work experience in Stockholm’s Monk’s Brewery.

“I’m looking forward to making some new recipes,” she said. “I’m a great fan of wheat beers and of Belgian beers flavoured with fruit. I’m excited to be part of Harbour Brewing.”

Harbour has been enjoyed steady success since its launch, gaining several listings in pubs and bars in Cornwall but also proving popular in craft beer bars in cities such as London, Manchester and Edinburgh.

The brewery’s going international too, with Lofthouse travelling with a British trade delegation to the Craft Brewers Conference in Washington this month.

A chocolate beer subtly infused with chilli and ginger will be making its way to the Great Australasian Beer SpecTapUlar in Melbourne, and there will also be Harbour beer in Sweden this spring. 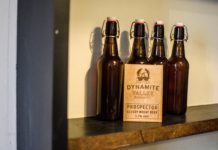