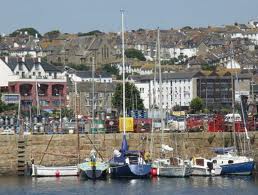 George had secured the meeting to ensure that Government Ministers understood how critically important this project is to the Scillies and to Penzance.

During Thursday’s meeting with the Minister George and the three Councillors emphasised the agreement on the scheme between their three authorities. This assurance was welcomed by Baker.

Councillor Rendle told the Minister that the town has reached a consensus after a lengthy, robust and wide ranging debate.

Councillor Thomas then told Baker that the Isles of Scilly wants to secure a durable facility for the sea link and strongly encouraged support for the scheme.

Baker welcomed the consensus and is keen to move forward.  He stated that he would now consider the proposals put forward by the three Councils and respond as soon as possible.

Andrew George MP, who arranged the meeting, emphasised the need to act in time to meet the deadlines for EU Convergence funding.  This was noted by Baker.