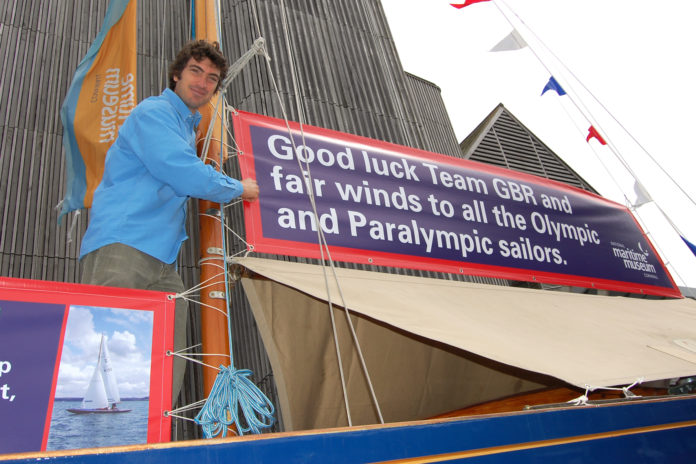 With only 14 days to go until the opening of the Olympics, National Maritime Museum Cornwall is playing its own part in the games.

Restored, re-painted and brought out from retirement, Bluebottle, a royal yacht and herself a winner at the 1956 Olympic Games, has taken pride of place outside the Maritime Museum awash with banners wishing good luck to Team GBR.

Ben Lumby, exhibitions manager said: “Following the hugely successful ‘Sail for Gold’ exhibition, which is now at Weymouth ready for the 2012 games, we just had to continue celebrating this very exciting Olympic year. We have Ben Ainslie’s Laser from the Sydney games on display inside the Museum and various other Olympic medal winning boats and artefacts including an Olympic torch from the 1948 London games, but we wanted to put something outside the Museum to wish all our Olympic sailors good luck.” 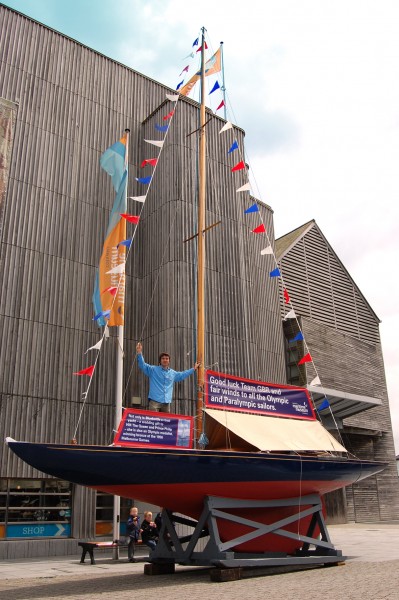 “Bluebottle, a wedding gift to Her Majesty the Queen and His Royal Highness the Duke of Edinburgh, won Bronze in the 1956 games in Melbourne. She is stunning and has been beautifully restored and painted with the support of our volunteers and apprentices from Pendennis Shipyard.

Bluebottle is a Dragon class yacht, beautifully crafted over 60 years ago and has a wooden build. She couldn’t be more different to the materials and designs of racing boats today. However, the Olympic spirit is certainly there and so we wish all of Team GBR fair winds and good luck in the London 2012 Olympic Games.”

Bluebottle will be on display outside the Maritime Museum in Falmouth throughout the duration of the Olympics and Paralympics.