Staff and friends came together at The Headland last week to mark the 40th anniversary since John and Carolyn Armstrong first took the keys to the hotel.

To help celerate, a cake designed and developed by husband and wife team Christine and Phil Jensen of Peboryon, was unveiled.

The cake, a replica of the hotel itself, stood at one foot tall, three feet long and one and a half feet wide. To serve 300 people, it included 130 eggs, seven kilos of flour and sugar, 12 kilos of butter, 15 kilos of fondant icing and involved three days of hard work by Penzance-based Peboryon, which regularly features on Channel 4’s Extreme Cake Makers.

It was a complete surprise for the Armstrongs and the design of the cake had been kept a closely guarded secret.

Phil Jensen of Peboryon commented: “Making this cake for the Armstrongs has been an absolute pleasure.

“Given the labour of love that the hotel has been, we really wanted to do it justice. That meant getting the details exactly right; every door, every window, the roofs, everything. The cake was a 1:70 replica of the hotel in Victoria sponge, with strawberry jam and a vanilla bean buttercream. The outside was decorated with fondant icing which we hand-painted to capture all of the many windows. We hope everyone enjoyed eating it as much as we enjoyed making it.”

Darryl Reburn, MD of the hotel, added: “John and Carolyn have invested more than £30 million into improving the hotel.

“At the time they purchased it, it had been through a period of decline and was in need of extensive restoration and refurbishment. It has been a lifelong project and while the Armstrongs tend to be reticent about their achievements, this is an opportunity for staff and lifelong friends of the hotel to recognise their accomplishments and share in their success.”

The Armstrongs stepped over the threshold of the hotel as its owners in March 1979. At that time, John was 29 and Carolyn 23. John Armstrong said: “We had the resilience of youth on our side and the enthusiasm to keep going. 40 years later, we are still striving to make the hotel the best in Cornwall.”

When they took on the hotel, the roof was leaking and water had soaked in to the second floor. The boilers had been installed at the time of the First World War and converted to run on heavy ships oil. The rear goods lift had been converted to electricity in 1923 and was still running, but only just.

Within the 40 years of tenure, the whole hotel has received a makeover, from new plumbing and heating, to electrics, the roof, the exterior walls and refurbishment across the entire hotel. 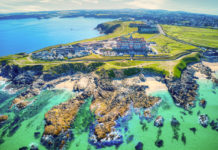 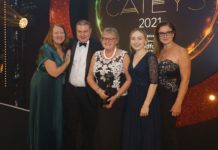 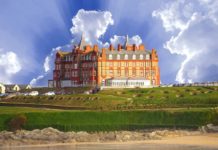