Actor Jude Law has identified the Isles of Scilly as the place in Britain where he is happiest.

The admission comes in a short promotional film in the run-up to the release of the action adventure film ‘King Arthur: Legend of the Sword’.

It is part of an international film tourism campaign from VisitBritain, to showcase why Britain is a ‘legendary’ tourist destination.

The campaign features an exclusive behind-the-scenes video of writer/director/producer Guy Ritchie, writer/producer Lionel Wigram and the film’s stars Charlie Hunnam and Jude Law on location talking about the epic British landscapes used in King Arthur: Legend of the Sword and the emotions they inspire.

VisitBritain director of marketing, Clare Mullin, said: “From watching the sunset from the Old Man of Storr on the Isle of Skye to walking in King Arthur’s footsteps in majestic Snowdonia to retracing his story at Tintagel Castle in Cornwall, Britain’s epic scenery, ancient history and magical landscapes have the power to transform our holiday experiences into the stuff of legends.

“Our collaboration with Warner Bros. Pictures on King Arthur: Legend of the Sword is a fantastic opportunity to showcase to a global audience of millions the legendary experiences only available in Britain, inspiring people to book a trip right now to discover their own epic stories.” 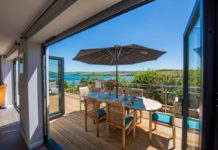